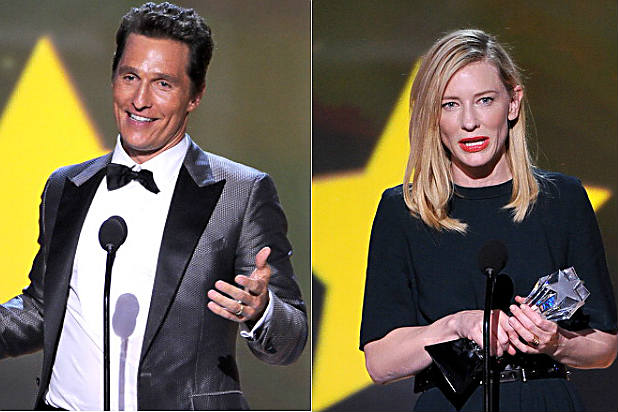 “12 Years a Slave” was named the best film of 2013 on Thursday at the Critics’ Choice Movie Awards, a nationally televised awards show put on by the Broadcast Film Critics Association less than 12 hours after Academy Award nominations were announced.

As at the Globes, “12 Years a Slave” was not the night’s biggest winner: Its three awards put it four short of “Gravity” and one short of “American Hustle.” But it won the final prize of the night, and the one that counted the most.

Over the years, the Critics’ Choice Movie Awards have been a fairly reliable predictor of Oscar success. Its best-picture choice agreed with the Academy’s choice 11 times in the CCMA’s 18-year existence, and six times in the last seven years.

This year, eight of the nine Oscar Best Picture nominees and 16 of the 20 acting nominees were Critics’ Choice nominees.

The show took place at the Barker Hangar near Santa Monica Airport, and was hosted by a relentlessly crude Aisha Tyler and broadcast on the CW Network.

The CCMA lineup of awards has become bloated in recent years by made-for-TV categories like Best Action Movie, Best Comedy and Best Sci-Fi/Horror Movie, some with corresponding acting awards. To fit those into the two-hour running time, the show presented most of the craft awards, along with such significant categories as original and adapted screenplay, in voiceovers as it went to commercials.

The show also included two honorary awards: the Joel Siegel Award, which Oprah Winfrey presented to Forest Whitaker for his acting and his humanitarian work, and the Louis XIII Genius Award, which Matthew McConaughey presented to Richard Linklater, Julie Delpy and Ethan Hawke.

The awards are chosen by the members of the BFCA, the largest film critics’ organization in the country. It is made up of more than 280 television, radio and internet critics and journalists.