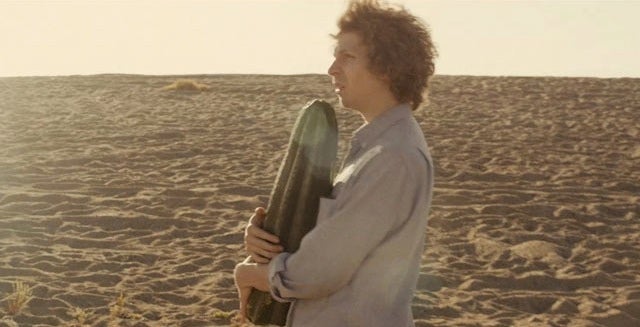 Movies don’t get more alternative than this.

“Crystal Fairy” is drug-fueled road movie that, like both kinds of trips, has its highs, lows and mundane moments. That one ends up enjoying the journey is both a credit to terrific performances by stars Michael Cera and Gabby Hoffman and Chilean director-screenwriter Sebastian Silva‘s careful and yet freehanded guidance. (Silva’s previous movies include “The Maid” and “Old Cats.) Cera plays Jamie, a self-involved, inconsiderate, twentysomething American spending time in Chile hanging out and sampling local narcotics. At a party one night, he meets a fellow Yank, a hippie chick, to use dated parlance, who calls herself Crystal Fairy (Hoffman).

He spontaneously invites her to come along on a road trip that he and three Chilean friends, who are brothers, are embarking upon the next morning. (The brothers are played by Juan Andrés Silva, José Miguel Silva and Augustin Silva, who are the real-life brothers of the director.) When Crystal Fairy actually shows up the next day for the trip, Jamie is horrified.

The quintet begin their journey, the purpose of which is to find a San Pedro cactus, boil it down and drink its hallucinogenic-causing juice while camping on a beach.

There are really three trips going on in this film: the road trip, the drug trip and the transformative journey that the characters, primarily Jamie and Crystal Fairy, make. He finally becomes a better person, and she is able to speak out loud a long held secret.

“Crystal Fairy” is a small movie — but beautifully shot, much of it with a hand-held camera — that conveys a sense of place and intimacy. Most of the dialogue was improvised, based upon an outline that Silva provided — the film is loosely based on a trip he himself took a dozen years ago — but it rarely feels excessive or self-indulgent.

Cera is amusing and, in the end, moving as a dislikable guy who eventually begins to understand that other people possess feelings, too.

As for Hoffman, who back in 1989 played Kevin Costner‘s young daughter in “Field of Dreams” and worked steadily as a child star for the next 10 years before taking a partial break from acting, she’s a wonder. Portraying Crystal Fairy, she gives a deeply committed performance as a free spirit who, whether clothed or nude — Hoffman  spends a big chunk of the movie wearing naught but sneakers — is always emotionally naked.