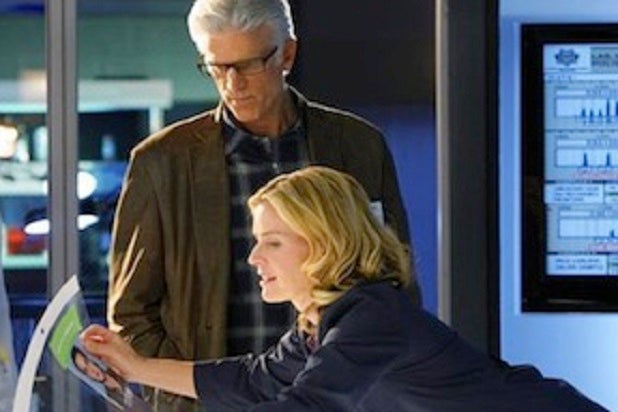 UPDATED, 7:55 p.m. Monday: CBS Television Studios has responded to Perdue’s complaint, saying it is dedicated to a harassment-free work environment, and that it has attempted to resolve Perdue’s claims, but will “vigorously defend” itself against his lawsuit.

“CBS is committed to providing a professional work environment for all of its employees, free of any form of discrimination or harassment,” CBS Television Studios said in a statement Monday. “We thoroughly investigated a complaint that Mr. Perdue made about his workplace and took immediate and appropriate disciplinary action. We have attempted to resolve his claims in mediation, but Mr. Perdue has chosen to file a lawsuit, which CBS will vigorously defend.”

Here’s a particularly icky case for the “CSI” gang to unravel.

CBS Corporation and CBS Film Productions are being sued by a man who claims to have been subjected to discrimination and harassment while working as a set painter on “CSI.”

In the suit, filed in Los Angeles Superior Court on Friday, Donald Perdue claims that paint department supervisor Jeremiah Redclay repeatedly referred to “certain actors and others” on the show by a myriad of graphic homophobic slurs.

When Perdue took Redclay to task for the slurs, the suit claims, Redclay assumed that Perdue must be gay as well — and “engaged in a campaign of retaliation and harassment.”

In addition to referring to Perdue with anti-gay slurs, the suit claims, Redclay “began drawing sexually disgusting and humiliating caricatures of Plaintiff Perdue and hanging them on or near Plaiff Perdue’s work station.”

Perdue protested over the illustrations, the suit alleges, but things only escalated. When Perdue tore down the drawings, the suit claims, Redclay “then screwed on a piece of plexiglass on a supply cabinet behind Perdue’s work station and started drawing grossly pornographic depictions of make and/or male on male sexual conduct.”

CBS has not yet responded to TheWrap’s request for comment on the suit.