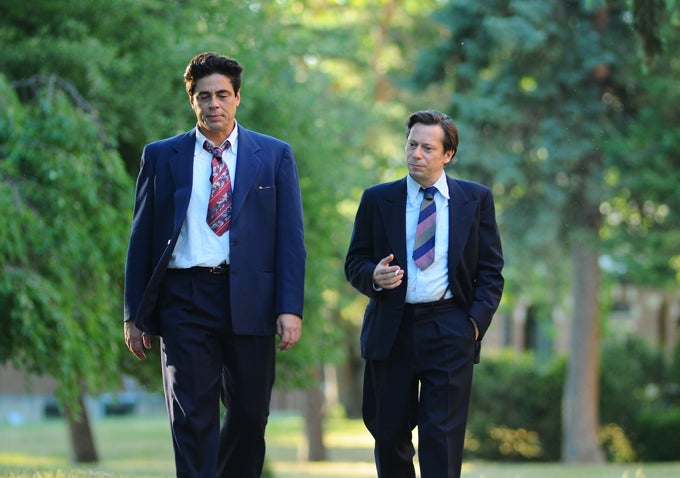 A curious story debuted at the festival in main competition on Saturday with Arnaud Desplechin’s “Jimmy P,” telling of the relationship between a troubled native American vet, played by Benicio del Toro, and his equally idiosyncratic therapist, played by Mathieu Amalric.

The story of Jimmy Picard (del Toro) is true, and the film is based on a 1951 study by the French ethnopsychiatrist Georges Devereux (Amalric), which tracked the daily treatment of Picard’s debilitating headaches, partial blindness and constant pain.

See photos: The Scene at the Cannes Film Festival

In minute and often crushingly slow detail, (at times one wonders if the entire contents of Deveraux’s notes were laid out in the screenplay) the story plumbs the depths of Picard’s relationship to his native culture and his abandonment of personal responsibilities after his war service, through his friendship with Deveraux.

French filmmaker Desplechin, whose other work has also favored psychoanalysis (“Kings and Queens”), has been working on adapting on this story for a couple of decades, and shot it in Detroit, among other locations.

Also read: Good Morning, Cannes: Much Ado About Absolutely Everything

Del Toro offers a moving portrait of a grown man struggling with his past and his own biology, willing to learn about the demons that torment him. Using a halting tone and fractured American accent, del Toro is far more gentle than the actor we know from “Traffic” and a host of tough guy roles. Amalric is also very effective as a quirky European eager to embrace a completely foreign conundrum in Picard. Still, the movie suffers from being too light and too heavy at the same time: the stakes are rather lightweight (especially given the history of native Americans) and the treatment of those stakes ponderous.

At the press conference after the first screening, del Toro said the uniquesness of the story was what attracted him to work with Desplechin. “The script was very original, the story is very original,” he said. ” I read a lot of scripts, and it was so original that I thought it was fabulous. I didn’t have to think about it."