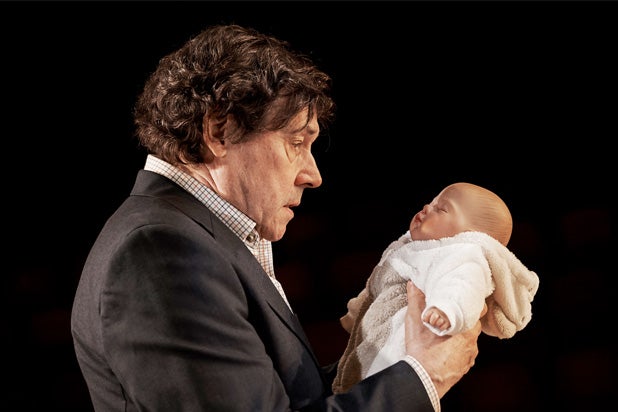 Crazy people are a staple of the theater. Crazy people in real life, on the other hand, are usually not very entertaining. They’re dull, incoherent, banal and very repetitious in what they have to say. Which sums up the character of Eric in David Ireland’s play “Cyprus Avenue,” which opened Monday at the Public Theater after engagements at the Abbey Theatre and the Royal Court Theatre.

Eric (Stephen Rea) is a Protestant, living in Belfast, who hates Catholics. He also hates unattractive women, gays and blacks, but mainly it’s the Catholics who inspire his very long and fiery screeds, because it’s the Catholics in Northern Ireland who he feels are systematically wiping out his heritage.

Rea’s performance can best be described as dogged and unrelenting. He’s just as intense with his first mouthful of bile as his last, and Eric has a lot of bile to chew and spew out in the course of this 110-minute play. Three of the characters Eric talks at (“talks to” doesn’t describe his speech) are mostly props — while the fourth, Slim (Chris Corrigan), is probably a figment of Eric’s very limited imagination.

Chief among Ireland’s props is the psychologist Julie (Ronkẹ Adékoluẹjo), who is mostly a device to get Eric to spill his guts as quickly as possible. Do playwrights ever go to the theater except to see their own plays? How many times have we seen this psychiatrist on stage: calm, the voice of reason, forever probing, without much personality to call her own? Julie questions Eric the way she would question a patient who’s going through a bad divorce, not someone who is about to and then does commit despicable felonies. Is this the way the National Health Service spends taxpayer money?

In the scene that introduces the crazy man’s wife, Bernie (Andrea Irvine), and his adult daughter, Bridget (Amy Molloy), Eric goes off on his new infant granddaughter (a remarkably lifelike doll) in a way that very much replicates the insanity that he has just unleashed on his shrink. Bernie and Bridget, however, react as if this is some kind of new, aberrant behavior on Eric’s part.

Clearly, something about the baby deeply disturbs him. But had these women no inkling before this encounter that he was becoming completely unhinged, not to mention a raving bigot who years ago used the C-word to describe his own daughter? Bernie and Bridget are none the less shocked, just shocked! But not so shocked that a scene or two later, they allow Eric to hold the baby. Again.

Maybe Ireland is telling us that Bernie and Bridget are the crazy ones, because any sane people would already have put a restraining order on this loon. Of course, Eric wastes no time defiling the child. The play wouldn’t progress if he didn’t.

What deeply disturbs Eric about his only granddaughter is that she looks like the Irish republican politician Gerry Adams. Later, he thinks she is Gerry Adams.

As for Slim, he’s even less imaginative in his hallucinations than Eric. One very hokey exchange between the two characters focuses on the career of Tom Cruise. After they’ve finished with that jolly analysis, Eric asks Slim if he’d do him the favor of bumping off his granddaughter. He wants it done on Monday night. Slim refuses, saying he can’t because that’s the night of his “anger-management classes.” As humor goes, that’s digging a hole after scraping the bottom of the barrel.

Since Eric is a politically conservative nut job, it gives Vicky Featherstone license to direct with overkill. (Spoiler alert!) When Eric stuffs the baby into a garbage bag, it’s not enough that he walk around beating the bag against the stage floor, already littered with a couple of other bodies. Featherstone has the white carpeted stage bubble up fake blood.

As with Eric’s therapist sessions, you will wonder how much it costs to replace the carpet after each performance.

For the record: A previous version of this review incorrectly identified two of the actors in the production.