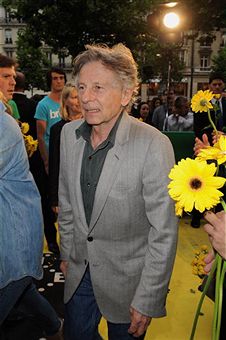 Just not without Polanski in the room.

In a scathing, 32-page document signed by District Attorney Steve Cooley, prosecutors responded to the director’s plea for a formal inquiry into allegations of bungling by the judge and prosecutors in 1977.

"Contrary to the false picture painted by petitioner Roman Polanski, through the use of half-truths, omissions and speculation, the people have at all times … acted with the utmost openness and integrity. As to Polanski’s claims of misconduct," it reads, "the people are fully willing to conduct a hearing on the now 32-year-old accusations, but insist on the condition that defendant Polanski present himself to the jurisdiction of the Superior Court.

And, perhaps hinting at the DA’s skepticism that Polanski is acting in good faith, added: "Proceedings should not be conducted merely to provide defendant with a preview of his sentence so he can decide whether or not to return."

On March 18, Polanski’s lawyers requested an inquiry into alleged prosecutorial misconduct during the director’s 1977 trial for rape. On March 20, the Second Appellate District requested that the D.A.’s office to respond by March 30 to the Polanski petition.

The almost 70-page petition seeks to overturn Judge Peter Espinoza’s ruling in January that Polanski was a fugitive from justice for having fled the US on Feb. 1, 1978, and could not be sentenced in absentia. It also claims Espinoza erred in failing to consider the allegations of judicial misconduct.

The DA’s statement sweeps all that aside, noting: "Justice also means imposing a long-overdue judgment on a defendant who has flouted the system for over 30 years. … it is also about remembering the heinous crimes of the defendant against the victim and the state."

Polanski was arrested March 11, 1977 on six felony counts, including rape and sodomy, for allegedly providing then 13-year-old Samantha Geimer with drugs and alcohol and having sex with her. The charges were eventually reduced to unlawful sexual intercourse after a plea deal struck in part to spare Geimer the exposure of a public trial.

Judge Lawrence Rittenband ordered Polanski to serve a 90-day psychiatric evaluation, but he was released after 42 days. The next day, Rittenband indicated to Polanski’s lawyers that the director could be sentenced to further significant time. Within a week the director fled the country and has not returned since.

On Sept. 26. 2009, Swiss police at Zurich airport took Polanski into custody at the request of U.S. authorities. After posting $4.5 million in bail, the Oscar winning director has been under house arrest at his Swiss chalet since November 2009.

Polanski’s petition seeks to expose supposed secret dealings between the court and high level members of the D.A.’s office back in the late 1970s. The Swiss have indicated they will not even consider deporting Polanski until the U.S. courts have come to a definitive ruling.