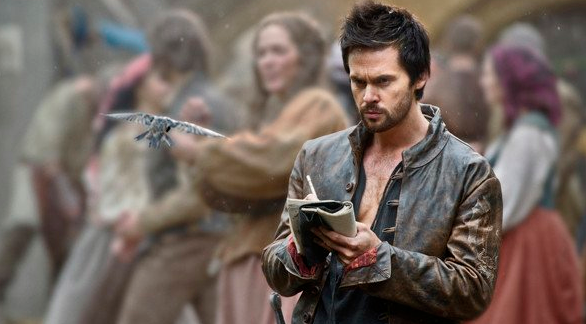 The co-writer of the "Dark Knight" trilogy and the upcoming "Man of Steel," has imagined for us a Leonardo Da Vinci nearly as relatable as a billionaire who dresses up like a bat or a flying super-powered alien.

That's good, because for "Da Vinci's Demons," debuting tonight on Starz, we need a steady guide through a Renaissance-era Florence that feels somewhere between gritty Gotham and sleek Krypton. The CGI prettiness of the scenes can mix oddly with the grittiness of the story – but then a bird or a plane or some device merging the two takes flight, and all is forgiven.

With his beard, leather jacket, and textured haircut, Da Vinci (Tom Riley) doesn't look much different from the other L.A. actor-types who populate so many cable dramas. So at least there's something familiar as the swooping cameras take us through lovely if overly computer-generated settings, from dizzying towers to rolling hills and gorgeous courtyards.

The great strength of Goyer's Batman films is how realistic they feel – not just alive, but jittery and adrenalized, as if every glass is about to crash and every bone about to pop. Dangerously alive.

"Da Vinci" doesn't have that feeling, yet, though the show does go for earthiness with a fair amount of nudity, even of the rarely seen full-frontal middle-aged variety. It helps us feel that we're among flesh-and-blood human beings, even amid the nagging sense that we're going into the false dreamscape of visual effects.

The conflict is at the heart of the big challenge for "Da Vinci's Demons": How to bring a sense of urgency to a far-off world. HBO's "Game of Thrones" gushes life through the fictional land of Westeros, and its realness makes its fantasy sequences all the more jaw-dropping. That's a balance "Demons" doesn't yet strike. Florence could use a little more of Gotham's grime.

Fortunately, it feels like it will get there, thanks in part to plenty of nasty characters eager to shed clothes and blood. They include double agents, middle-aged men who don't treat their boyish companions very nicely, the church, and the Medicis.

All the intrigue can be hard to follow at first. But fortunately, we see it through the keen eyes of our hero, who has enough touchstones with Batman for us to understand his essential struggle even if we know next to nothing about the Renaissance.

As Goyer has noted before, both Da Vinci and Bruce Wayne are haunted by parental loss at a young age and both had horrific, life-changing experiences in a cave. As we see in the series premiere, the similarities don't stop there.

Both are also fascinated by artificial flight, inhabit corrupted cities full of grotesque villains, and are closely linked to a mysterious secret society.

Wayne may be a Renaissance man, but Da Vinci was the original. He's a painter, swordsman, inventor and lover who really wants a contract to make military weapons, because, he figures, war is where the innovation is.

Like any great hero, he also has weaknesses — which may turn out to be strengths. First, he's a bastard, forced to make his own way rather than relying on family wealth. (Between "Da Vinci" and "Game of Thrones," bastards are having quite a nice run lately on premium cable.) His determination makes him smarter and tougher than the nobles.

He's also overly fond of opium. But the visions he experiences on it – besides providing some of the show's many lovely visuals – also provide him answers about his mysterious past.

That mystery has plenty of potential to drive "Da Vinci's Demons" forward. He quickly learns from a smoking buddy named "The Turk" that something called "The Book of Leaves" contains secrets that can help advance his already far-ahead-of-their time contraptions, which include, in the first episode, a hang glider prototype and flying mechanical birds.

If you have trouble following the drama or keeping track of the characters, don't worry. The visuals will keep you occupied as the show rolls out and explains its conspiracies.

The show's first flying sequence – in which Da Vinci helps his young assistant take to the sky – is kind of underwhelming. That's too bad, because later ones are simply beautiful.

In one scene, Da Vinci watches birds fly from a cage and sketches their movements. We see the birds freeze, as they do in his mind, and his sketches appear in place of the birds. It's a brilliant way to show us how Da Vinci's mind works. Later, in another sweeping sequence, we see how Da Vinci translates life into art and then into a merger of the two.

Here's hoping "Da Vinci's Demons" can do the same.