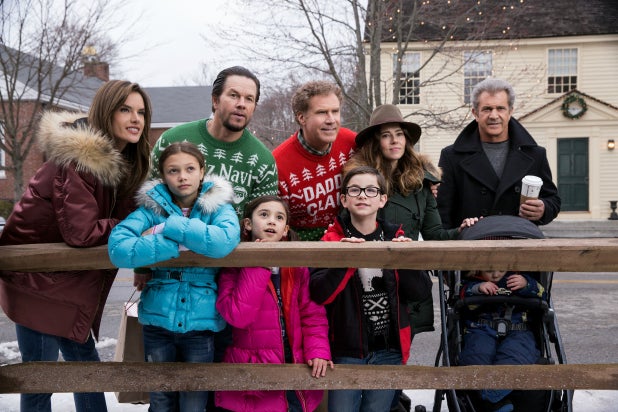 Somewhere, there’s a parallel universe where the Will Ferrell-Mark Wahlberg movie that became a series is their 2010 collaboration “The Other Guys” — and in the words of Tina Fey, “I want to go to there,” if only to be spared any future sequels like “Daddy’s Home 2,” a painfully unfunny follow-up to the painfully unfunny 2015 movie.

I laughed a total of three times during this witless trudge as it went through its predetermined part-two paces — gotta make the friends into enemies again so they can become friends all over again — and found myself wishing I was re-watching “A Bad Moms Christmas,” another sequel with a very similar premise that nonetheless mines far more mirth and meaning from its sitcom set-up.

Like the first “Daddy’s Home,” the movie addresses the nature of combined families and the hazards of step-parenting, but it constantly does so in a way that makes “Full House” seem like a Frederick Wiseman documentary. But for those keeping score: Dusty (Wahlberg) used to be married to Sara (Linda Cardellini). Their two kids, Megan (Scarlett Estevez, “Lucifer”) and Dylan (Owen Vaccaro, “Fun Mom Dinner”) are now being raised by Sara and her second husband Brad (Will Ferrell), with plenty of intervention from Dusty, who has gone on to marry Karen (model Alessandra Ambrosio), who has a daughter, Adrianna (Adriana Costine, “The Hollars”), with her previous husband Roger (John Cena), who hates Dusty.

Since what this story clearly needed was more characters, we get a Christmas drop-in from two surprise visitors: Dusty’s dad Kurt (Mel Gibson), a womanizing former astronaut, and Brad’s father Don (John Lithgow), a retired mail carrier and chatterbox. The kids adore Don and his corny jokes, but don’t know what to make of Kurt, who rarely appears and isn’t remotely warm. So Kurt decides to take the extended family up to a snowy mountain cabin for the holidays.

Calling what ensues “hijinks” would be an insult to hijinks. Brad falls down a lot and gets hit in the head with various decorations. (And by the way, for a rental property, there’s an insane amount of Christmas decorations on hand.) Kurt tries to poison Brad and Dusty’s “co-dad” relationship. Don has been keeping secrets. Everything culminates on Christmas Day, when everyone finds themselves snowed in at a remote multiplex showing a (heard, but never seen) Liam Neeson action epic called “Missile Tow.”

Director Sean Anders (“Horrible Bosses 2”) and his co-writer John Morris (“We’re the Millers”) execute what are supposed to be the laughs with blunt force. The jokes announce themselves with heavy footsteps, and almost none of them land, stranding a talented cast with terrible material that they’re straining to sell. Lithgow can be one of the subtlest performers around, but here he’s forced to deliver every line with the booming gusto of his Progresso soup commercials, while Wahlberg, Cena and Gibson portray disheartening variations on cartoonish toxic masculinity. (The women, once again, are mainly instructed to stand around and pout.)

And while we’re on the subject of Gibson: since the industry has apparently exonerated him for his past sins of hate speech (not just to Malibu police officers but also to journalists and to his ex-wife), he has offered interesting work on both sides of the camera. His performance in the wonderfully grungy “Blood Father” allowed him a fittingly dark grindhouse turn, and “Hacksaw Ridge” gave him another opportunity to work out his inner conflicts of faith and fury on a large scale.

But in a family comedy, in which his anger and homophobia are never far from the surface — Kurt recoils every time Brad and Don show each other affection — there’s nothing cute or funny or “irascible” about him. Gibson carries with him a very R-rated rage that doesn’t play in this PG-13 setting, and his every appearance gives the film a grim and unintended subtext.

Not that “Daddy’s Home 2” is otherwise any good, of course, but Gibson weighs down what is already a sinking ship. Comedies, and Christmas, deserve better.