It’s not impossible for a comedian to straddle rowdy raunchiness and family-friendly sweetness over the course of a career: the best of Will Ferrell‘s R-rated comedies are in no way diminished by his adorably naïve turn in “Elf.”

For a single movie to appeal to a kid audience with wacky antics and sentimental moralizing while at the same time trafficking in jokes about artificial insemination is another matter entirely, and it’s that level of tonal dissonance that keeps “Daddy’s Home” from living up to its potential.

Ferrell stars as another of his normcore dorks — lite-jazz radio exec Brad would love to be a dad but can’t after a mishap with a dental X-ray machine. The next best thing, however, is to be stepfather to Megan (Scarlett Estevez) and Dylan (Owen Vaccaro), the children of his wife Sarah (Linda Cardellini). Brad loves parenting, from coaching junior basketball to volunteering for the carpool lane, but Megan and Dylan are slow to warm to this interloper.

Just at the moment when Megan’s drawings involve Brad as part of the family circle and not a victim of a horrible accident, Brad’s fragile status is threatened with the arrival of Dusty (Mark Wahlberg), Sarah’s first husband and father of her kids. From the moment Dusty comes roaring into the picture on his vintage Indian motorcycle, the battle is on between Husband #1’s bad-boy worldliness and Brad’s mild-mannered sensitivity for the family’s affections.

That’s not a terrible premise, and the reteaming of Ferrell and Wahlberg after the hilarious “The Other Guys” raises expectations for a sharp comedy about stereotypes of masculinity and the absurd lengths to which step-parents can go to win the affection of their new progeny. Unfortunately, this cast and this set-up are in the hands of director Sean Anders (“That’s My Boy,” “Horrible Bosses 2”) and co-writers Brian Burns (“Entourage”) and John Morris (“We’re the Millers,” “Mr. Popper’s Penguins”), whose collective previous credits provide ample insight into the leaden, exaggerated situations on display. 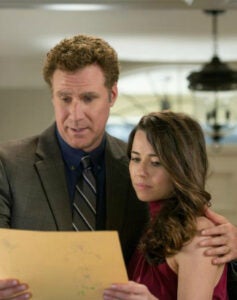 In the same way that a PG-13 rating on a horror movie generally means a bloodless, jump-scare-dependent chiller, this PG-13 comedy tries to split the difference, offering an extended and completely unfunny bit about the shape of Brad’s (thankfully offscreen) testicles while couching the movie in a suffocatingly cozy and kid-friendly domesticity.

Ferrell and Wahlberg are both game, but the material only sporadically lets them let loose and do something truly creative, while poor Cardellini transitions from naggy to unreliable. Her character, Sarah, is smart enough to sense Dusty’s manipulations even when good-natured Brad keeps falling for his schemes, but at some point even she starts acting like she’s succumbing to the charms of an ex-husband who she had good reason to kick to the curb in the first place.

The handful of slapstick moments that land — you would have to be made of stone not to laugh at Ferrell accidentally riding a motorcycle through his own house — only accentuate the dead periods between the laughs. Someday, on cable, “Daddy’s Home” will make for adequate, half-watched entertainment, but it’s not a movie that mommies, daddies or their charges should bother to leave the house to see.