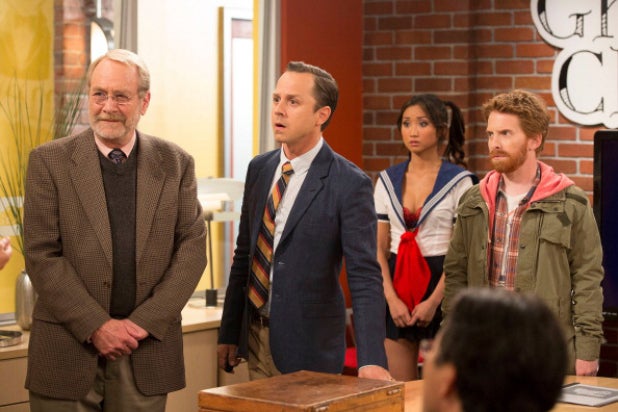 The executive producers on Fox’s “Dads” are hoping that the old adage, “There’s no such thing as bad press,” holds true for network sitcoms.

“Dads” has been the subject of scrutiny over some of its material, which some say is more overtly racist than edgy and funny.

Or if you ask the men behind the series, really just one person says that.

“It’s pretty much one guy who’s offended,” Executive Producer Mike Scully said. “I’ve dealt with him before on ‘The Simpsons’ 10 years ago. He just sits at home waiting to be offended and just fires off letters. And unfortunately networks actually listen to him sometimes.”

That one guy is actually named “Guy.”

Guy Aoki is the founder and president of Media Action Network for Asian Americans (MANAA). He is also not a big fan of the fall comedy, which stars Seth Green and Giovanni Ribisi as video game creators. It also stars Brenda Song, an Asian-American actress who plays Veronica, their VP of Game Development.

In the pilot episode of “Dads,” the guys convince Veronica to dress up as a giggly “Asian schoolgirl” to win a contract with Chinese businessmen. In a series of letters to Fox executives, Aoki called the scene “demeaning” and “racially and sexually offensive to Asian Americans.”

Fellow EPs Alec Sulkin and Wellesley Wild are no strangers to strong reactions to their comedy either. The writing partners dealt with a similar situation on “Family Guy.” Their adversary there was the Parent Television Council.

Of course, part of the possible “Dads” blowback can be attributed to the differences that the executive producers — who have all made their bones in animation — see between cartoon humor and stage humor.

“On ‘The Simpsons,’ we have Homer strangling Bart, which is a lot of fun in animation,” Scully told TheWrap. “But if you saw it live-action — if you saw Ray Romano strangling his kids it would be horrifying.”

“With a cartoon, literally the word itself implies an element of fantasy about it — or unreality,” Sulkin added. “But when they’re doing it live in front of an audience … it does have a different feeling to it.”

Whether viewers at home laugh or not is up to personal sensibilities and individual senses of humor. But the executive producers want you to know that there is no laugh track on “Dads,” and the laughter you hear on screen in legitimate.

“Dads” is actually Fox’s only multi-camera sitcom — therefore it is the network’s only comedy show that films before a live studio audience, a lost genre in modern television. The showrunners throw “How I Met Your Mother” under the bus as the only show on TV that uses a real laugh track.

With four episodes in the can, so far, so good with the live studio audiences. If anyone has been offended in the bleachers, the EPs haven’t heard about it.

Sulkin is staying optimistic about the show, which may be hard for the more 550,000 people who follow his cynical — yet often hilarious — Twitter handle (@thesulk) to believe.

“I don’t like to say the controversy has helped us, because we really don’t know yet; we haven’t premiered,” Sulkin said. “But I feel like, in a fall season where there are so many shows coming out and everyone’s trying to get some kind of attention, we’ve really gotten a lot.”