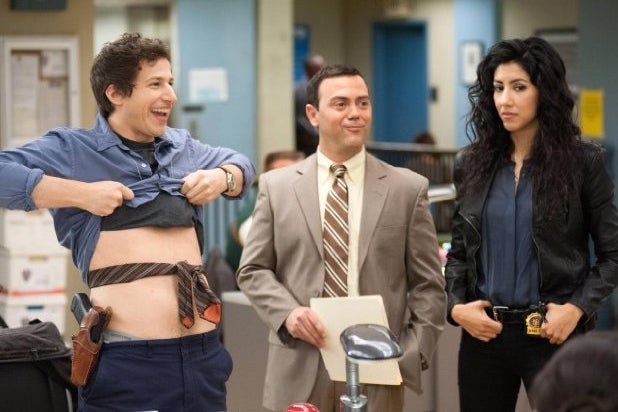 Joe Lo Truglio doesn’t look like a cop — but he plays a funny one on TV.

The former “Reno 9-1-1” star swears that his new show, “Brooklyn Nine-Nine” — which premieres at 9 ET/PT Tuesday night — is not just a funny version of the “Police Academy” movies, if that’s what you were thinking. If anything, it’s more like “Barney Miller,” he told TheWrap.

Viewers know Joe Lo Truglio — some just perhaps can’t put a finger on from where. “I think ‘Lo Truglio’ in Italian means quote, ‘That guy,'” he joked to TheWrap.

The Queens native, most recognized for “Superbad,” hopes that “Brooklyn” cements his mug — as well as his short-sleeve button-downs — in people’s minds. On it, he plays loyal-but-socially-awkward Detective Charles Boyle of the 99th Precinct in Brooklyn.

Boyle has a crush on a colleague who is way out of his league, played by Stephanie Beatriz, but truly idolizes his partner, the bad-cop to his good-cop, Jake Peralta (Andy Samberg).

See video: Andy Samberg Explains Yom Kippur to Jimmy Kimmel: ‘It’s Like the Opposite of a Party’

Samberg is clearly top dog in a cast billed as an ensemble, but Lo Truglio says the “Saturday Night Live” alum is too humble to ever say that himself.

“I’m excited for [Samberg], because not only is it a great opportunity — I think he hits it out of the park,” Lo Truglio told TheWrap. “He’s well aware of how he’s perceived as perhaps just a goofball — and it couldn’t be further from the truth.”

While Samberg, Lo Truglio and  Chelsea Peretti give the show its comedic validity, the actor who really provides the law-enforcement legitimacy is Andre Braugher.

Without Braugher, who played Bayard Ellis on “Law & Order: SVU,” the single-camera series would just be a comedy circus, Lo Truglio said.

That’s not to say it doesn’t sometimes feel that way on set, though. “Brooklyn Nine-Nine,” like “Parks and Recreation,” shoots its scenes as written but then goes on what the EP of both comedies, Mike Schur, calls a “fun run.”

There, the scene is opened up to improv and ad-libbing, which is right up the alley of a veteran like Lo Truglio, who started with sketch-comedy series “The State.”

Even so, sometimes the only thing that changes in the “fun run” is the volume, Lo Truglio says.

“Frequently we kind of just say what’s scripted with just even more energy, louder, with more gestures,” he told TheWrap. “Suddenly the ‘fun run’ turns into … a more theatrical version of what we shot already.”

The top compliment that Lo Truglio can pay the quality of the show and the chemistry of the case is an observation of a cast mate that “Man, everyone just wants to be here.”

Let’s see if the viewers agree.