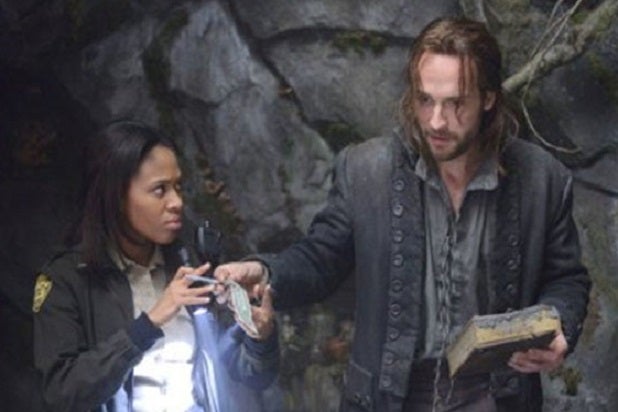 “Sleepy Hollow,” Fox’s revamp of the classic Washington Irving tale “The Legend of Sleepy Hollow,” premieres Monday at 9 p.m., and this definitely isn’t your grandpa’s version of the story. In order to help you not lose your head over all of the changes, TheWrap presents five things to be prepared for, as told by executive producers Alex Kurtzman and Roberto Orci during a conference call with reporters last week.

1. Ichabod Crane Will Be British. And More Robust

While Irving’s version of Ichabod Crane was a timid schoolteacher, “Sleepy Hollow” has cast British actor Tom Mison (“Parade’s End”) in the role, and he definitely plays down the meekness factor in his portrayal.

“[O]riginally we were not going to go with an English actor, but when we first met [Mison] and saw him read, we realized that actually in the day of the Revolutionary War many of the folks fighting for revolution and for the independence of this country might have been from the U.K.,” Orci explained.

As for making Crane less lily-livered, Kurtzman added, “[Crane] is a school teacher, so we did keep that, he was a professor of history, and yet, he fought in the Revolutionary War. So in a weird way, it allowed us to have our cake and eat it too because he is definitely a more robust sort of man of action man of action than he was certainly in the short story. “

2. The Series Will Be Scary — But Not Necessarily Gory
According to Kurtzman, “Sleepy Hollow” will give you goosebumps, but will employ more than cheap violence to do so: “{T]here is a very big distinction between between cable and network in terms of what ou can get away with, with violence and horror. Oviously you can get away with a lot [on] network, but in a weird way it’s almost a distinction between like a straight slasher movie and a psychological horror movie. We’re not aiming to do a slasher movie.”

3. It’s Not Necessarily Appointment Viewing — Though the Producers Hope it Will Be
Kurtzman and Orci say that “Sleepy Hollow” won’t be quite as dense as their earlier project “Fringe,” which willl allow viewers to catch up if they miss an episode, which the duo really hopes they don’t.

“[H]opefully viewers will be able to come to an episode, if they have missed one before, and of course they won’t have, because they are going to watch every single episode, but if they have happened to miss the one before it, they are going to be able to catch up very, very quickly,” Kurtzman said. “That’s the key in that each episode needs to have a closed-ended story, but as Bob [Orci] said, the emotional story telling is very serialized, the characters are carrying their experiences and building on their experiences episode to episode.”

4. The Headless Horseman Will Be Doing Double Duty
As a series that skips through time, “Sleepy Hollow” will allow the headless horseman to do a little moonlighting — as a horseman of the Apocalypse.

“The minute you have a headless horseman, that seems like a rather ominous, powerful, and in our minds, became a biblical thing, so when we were imagining what the next chapter of ‘Sleepy Hollow’ could be … we thought of, what if the Headless Horseman got a little more connected that you ever imagined,” Kurtzman said. “Actually, he is only one of the horsemen, one of the four horsemen of the Apocalypse, and it was through this connection of the antogonist of the original short story that we thought maybe that’s the larger mythology that the original short story could have been embedded in and we kind of ran with it from there.”

5. “Sleepy Hollow” Will Be on the Small Screen, But it Will Get Cinematic on You
“The line between movies and television is gone these days. It’s just gone,” Kurtzman said. “And so when people watch TV, I think they are, particularly in genre shows like this, I thnk they are looking for a real cinematic experience and that is what we are intending to deliver to them every week.”