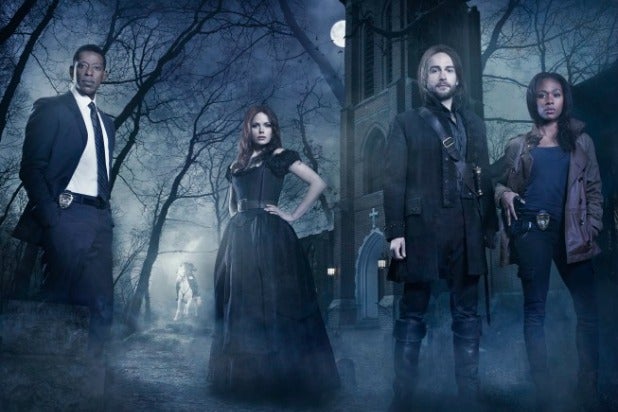 Like the small town for which it’s named, “Sleepy Hollow” seems pleasant enough on the surface. The deeper in you get, the more you find it’s full of surprises.

Unlike the ones in the New York village, the show’s surprises are welcome. The new Fox show would be worth watching for the Headless Horseman alone. He moves with the fluidity of a decapitated Terminator: oddly confident, despite an apparent lack of capacity for emotion.

And then we meet a villain who’s scarier than he is. Way to keep us on our toes, “Sleepy Hollow.” The show, debuting Monday night on Fox, comes from “Star Trek” vets Alex Kurtzman and Roberto Orci, as well as Len Wiseman (“Underworld”) and Phillip Iscove.

It doesn’t yet have the urgency of a series you just have to see — nothing this season does — but you could do a lot worse if you’re looking for a fix of good-looking people trying to prevent the apocalypse.

The first is Ichabod Crane (Tom Mison), handsomer than you may remember from Disney’s “Sleepy Hollow” cartoon. We meet him in the midst of the Revolutionary War, as he separates a Hessian from his head. Crane is British but has joined the Americans, because their cause is so obviously just.

As Crane goes to sleep in a cave, the show does its first story mash: He wakes up Rip Van Winkle after two-and-a-half centuries, in the modern age. His Hessian rival co-opts another story, one of the most popular: He comes back as one of the Four Horsemen of the Apocalypse.

Apparently Gen. George Washington was not only trying to shake off the monarchy but also prevent the end of the world. Crane resumes his mission in the modern age with help from Sleepy Hollow police Lt. Abbie Mills (Nicole Beharie), who’s about to leave for the FBI.

She’s black, he’s white, he’s a guy, she’s a lady, he’s from the 18th century, she’s not. They have things to talk about, and to the show’s credit, they do. There’s a surprisingly frank talk about the changing roles of women and African-Americans throughout our history. Crane proves to be a forward-thinking dude.

He’s also quick on the draw when it comes to technology. We’re spared too much of him figuring out how phones and cars work. He’s a soldier on a mission, so he adapts. There’s a Headless Horseman out there. The Horseman’s a fast study, too: He proves adept with a range of new killing machines.

About midway through, the pilot seems ready to settle into an “X-Files” dynamic: Abby is the sensible Scully and Ichabod the wild-card Mulder. But then another smart thing happens: She turns out to have a backstory nearly as wild as his. And as scary as his nemesis may be, hers is worse.

One reason the pilot works as well as it does it the way it flips the expected audience surrogate. We begin with Ichabod, not Abby, so we don’t see him as the weirdo he is. We begin to feel like we know Abby — Clarice Starling type, ready to blow this town — until we find out why she’s the only one who takes Ichabod at his word.

Beharie, recently seen in “42,” sells her character beautifully. We relate to her, even while we’re a little in awe. Mison, meanwhile, winks at us just enough.

And does he wink at Abby? Not yet. He has a wife (Katia Winter) trapped in some kind of limbo.

Lest things get too simple.