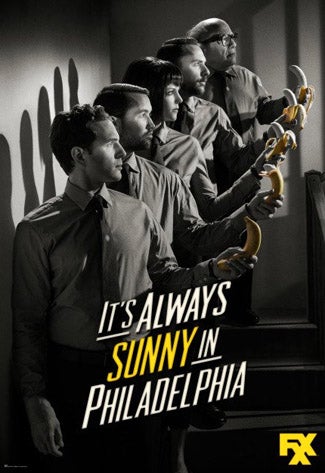 “It’s Always Sunny in Philadelphia” has always been good at playing the underdog – or even the dead dog, like the one that once fell out of a coffin during a baby funeral on the show. It takes pride in being mangy and scraggly and not up for a game of fetch.

Creator and star Rob McElhenney‘s anti-sitcom is driven by disgust at the phoniness of less funny, more popular shows. With near-total creative freedom, the series has become one of FX’s biggest hits. (FX president John Landgraf once gently suggested that McElhenney change a child molester priest into a child molester coach, but that’s it.)

Now FX is using the show to anchor its new, younger skewing FXX. But becoming the big dog hasn’t cost “Sunny” its bite. It’s only gotten meaner and funnier.

Tonight’s episode, which begins the show’s 10th season, is one of the show’s cruelest yet. It plays out like the kind of joke the show’s characters would screw up if they tried to tell it in Paddy’s Bar: It has a brutal setup, a long middle, and an incredibly nasty conclusion. Luckily its written by McElhenney, Charlie Day and Glenn Howerton, who are much smarter than the guys they play.

The episode gives the best material to McElhenney’s wife, Kaitlin Olson, who has sneakily become the best part of the show. “Sunny” has always been repulsed by vanity, especially by actors, and its stars seem locked in a game of chicken to see who will go the furthest for a laugh. McElhenney’s Mac took the lead when he gained 50 pounds. Day’s character is a huffer who cleans toilets with his bare hands. Danny DeVito‘s Frank Reynold’s agreed to be locked in a cage. (“Move the cage so I can see!” he once begged.) And Howerton’s Dennis may be the most pathetic character of all, because he thinks he’s so above his fellow losers.

But Olson, maybe because she’s actually pretty, seems the most delighted to go gross. In the premiere, her Sweet Dee becomes a comedian who doesn’t bathe and directs most of her best insults at her vagina.

The season’s second episode takes on the gun debate, splitting up the gang into two equally repellant camps: The gun opponents are condescending jerks, and the gun fans have adolescent hero complexes. And then the debate gets more nuanced, and both sides learn to see the other side’s point of view, without anyone getting smarter.

The third episode is probably the most “Always Sunny”-ish episode of “Always Sunny,” except maybe for the one with the baby funeral. The episode finds the gang wondering why their bar never wins any awards.

There’s an obvious parallel between their bar and their show, especially when they go to another, beloved bar full of sitcom clichés: the affable lead, the black best friend, the will-they-or-won’t they dynamic.

At one point they wonder if their bar’s location is the problem – until they realize that another new bar that opened near Paddy’s has won lots of awards. (You get the feeling it might be named “Louie’s.”)

With the move to FXX, they have their own new neighborhood. Let’s hope they keep making a mess of it.