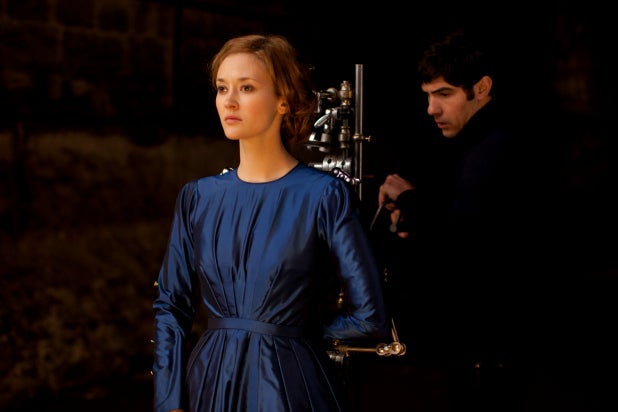 Each year to varying degrees of success, the Toronto International Film Festival adds more and more titles to its robust slate. Statistically, it seems the more movies, the greater the possibility of true discovery. Unearthing a new artist at work before they’ve been recognized by the general public is a major reason why critics, distributors and beyond attend these week-long, sleep-deprived functions.

The downside to this approach is that titles are let in that really aren’t ready to be going up against a movie by cinematic giants (Wim Wenders, Pedro Almodóvar) or emerging talents (Ana Lily Amirpour, Tom Ford). That sounds a bit more competitive and athletic than it probably is, but if “Daguerrotype” was in a March Madness bracket, it would be seeded somewhere between 13-15. Congrats on making it into the tournament, “Daguerrotype,” but it’s unlikely you’re making it past the first round.

The first round, in this case, being the general audiences of Toronto. Sophomoric and sluggish, “Daguerrotype” (aka “Le secret de la chambre noire”) is a classic example of a feature-length film that could just as easily have been presented as a short. It’s a recurring trend in festivals to program these titles: needlessly elongated, amorphous, under-cooked.

Directed by revered Japanese auteur Kiyoshi Kurosawa (“The Cure,” “Pulse”), the film is driven by the machinations of Jean (Tahar Rahim, “A Prophet”) and Marie (Constance Rousseau, “Simon Killer”). Jean, a handsome Parisian, is the assistant to Stéphane (Olivier Gourmet, “Two Days, One Night”), a renowned photographer. Tensely ambling around in Stéphane’s decaying mansion, the two are intensely working on creating life-sized daguerrotypes, a process of printing an image on a light-sensitive silver-coated metallic plate. For Stéphane — whose wife unexpectedly passed away too soon — the art seems to be a distraction from loneliness.

Complications arise when Marie, Stéphane’s muse-model-daughter, falls in love with Jean. The pair are young and in love, inhabiting the honeymoon phase as if it’s forever. To further their relationship, the two hatch a plan to get out from under the control of Stéphane. Detailing the duplicity much more than this would be a disservice to prospective viewers, and to Kurosawa.

Without spoiling anything, horror elements ensue. Those large daguerrotypes? Maybe not the best idea.

See Video: When Natalie Portman and Lily-Rose Depp Bonded Over a Massage

The shift in tone most acutely changes at around the 60-minute mark. It’s around that time that Kurosawa lives up to the line in the press notes, “a classic horror story.” Well, maybe not the classic part. But there is horror, albeit mostly in the audience response.

Jaggedly transmuting into a spooky story about ghosts, familial ties and budding romance, “Daguerrotype” never quite finds its footing. It’s two or three movies haphazardly wrapped into one. All of these frustrating elements are exacerbated by not only the length (and the constant insistence on long, tired shots of nothing), but the lighting.

Given Kurosawa’s impressive filmography, it’s uncertain whether this was an aesthetic choice or an oversight. There are times when his use of shadows and darkness to convey looming danger more often than not is simply murky.

On a positive note, Rahim and Rousseau do establish some chemistry early on. It dissipates by the credits, but there’s something moving about their quest for autonomy. As is the case with most young love, the exhilaration and intrigue of those early conversations can’t be sustained, particularly when the director doesn’t see the value in the characters he’s created. By the end, Kurosawa abandons his charismatic flesh-and-blood leads for corporeal ghosts, and “Daguerrotype” suffers for it.