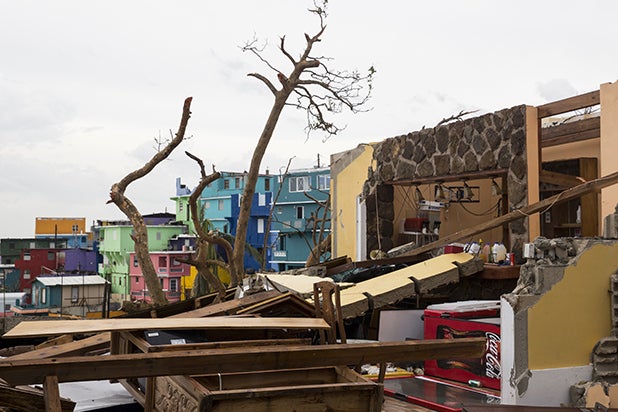 Hurricane Maria caused devastation as it passed over Puerto Rico on Wednesday, including in the colorful La Perla neighborhood, best known to non-residents as the location showcased in the music video for Luis Fonsi and Daddy Yankee’s summer hit “Despacito.”

However, as the Caribbean island begins its struggle to get back on its feet in the days following the storm, the Daily Beast took some heat on Thursday for using the pop song as a lens through which to view the human suffering.

The piece, titled “Famed ‘Despacito’ Neighborhood Destroyed by Hurricane Maria as Puerto Rico Struggles in the Dark” from writers Christopher Dickey and Pablo Venes, has been slammed by critics for being insensitive toward the people whose lives were destroyed, and to a part of the world that existed long before “Despacito” brought it to a wider audience.

“Hey @dailybeast where do you get off with this bulls— headline/framing,” GQ contributor Joshua Rivera wrote on Twitter.

One paragraph equating the song’s sexually charged lyrics to the tragedy experienced by the people of Puerto Rico was singled out as the most objectionable portion of the story.

“There’s a line in ‘Despacito’ where Luis Fonsi sings about making love on the beach in Puerto Rico ‘until the waves scream, ‘Oh Lord!’ (‘Hasta que las olas griten ‘Ay Bendito!’) But as the waves and wind screamed on Wednesday it was the people who were crying and praying,” the section reads.

“It’s almost as if one shouldn’t use a reference to a pop song when reporting on a horrifying natural disaster!” wrote one user. Another simply shared a screenshot of the passage with the caption, “ughhhhhhh.”

See more of the reactions below:

Hey @dailybeast where do you get off with this bullshit headline/framing https://t.co/tA4gids7ma

it's wild that "despacito" is their only exposure to this part of america!

It's almost as if one shouldn't use a reference to a pop song when reporting on a horrifying natural disaster! https://t.co/Z4Sb9jRm4O https://t.co/ia8lSXYck1