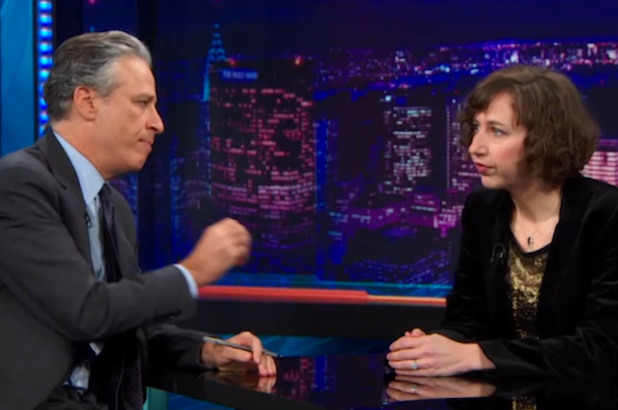 “Daily Show” correspondent Kristen Schaal and host Jon Stewart dove into the long legacy of workplace sexual harassment and they have Fox News’ Brit Hume to thank for inspiring their penetrating look at the bad blood between the genders.

Hume has theorized thatNew Jersey Gov. Chris Christie is in the midst of a political scandal because a  “feminized” culture couldn’t handle “old fashioned tough guys.”

“We just didn’t realize how hard our success would be on men,”Schaal said.

“That is so tragic,” she added. “Poor incredibly manly, muscular man’s man Brit Hume. It was not our intention to feminize the atmosphere by coming in with our cut flowers and scented computers and our breast milk fax machines.”

To understand where Hume and Christie were coming from, Schaal and Stewart engaged in an extensive role play. Schaal plied Stewart with scotch while calling him “sugar tits” in an effort to help him understand what it was like to be the object of harassment. The only problem was she discovered she like it.

“I never knew how thrilling it is to have all that power to abuse,” Schaal said.

“I guess men will just have to adjust to a new world of equality where we treat each other with respect,” Stewart said.

“F–k that,” Schaal countered. “This absolute power is too much of a rush. Oh we’re coming for it and we’re going to abuse it much better than men…when we’re done with you, you’ll be begging for groping.”