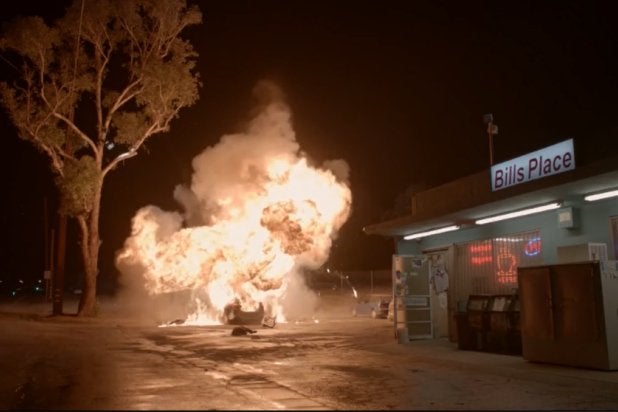 (Spoiler alert: Do not read on if you have not yet seen the two-part season finale of TNT’s “Dallas” entitled “Endgame” and “Brave New World.”)

“I’ve done some soul searching and I’ve finally figured out the answer,” John Ross (played by Josh Henderson) told Bobby (Patrick Duffy) after his latest move. “I am not just like my father. I’m worse.”

How much worse than Larry Hagman‘s J.R. Ewing quickly became apparent, though it wasn’t immediately clear how involved John Ross was in what came next. In a show that’s made headlines for major character deaths, “Dallas” may have delivered yet another epic one.

The closing moments of the two-hour season finale, which featured every bit as many twists and turns as a typical episode of ABC’s “Scandal,” featured Elena (Jordana Brewster) discovering a little parting gift Nicolas (Juan Pablo Di Pace) left with her in a gas station bathroom. She was pregnant.

We see Christopher (Jesse Metcalfe) get into the car outside the bathroom to wait for her, and then we see a nearby man dial a phone number. Elena steps out of the bathroom and then a fireball lights up the night sky as Christopher’s car explodes. It seems pretty cut and dry that he was in there, but this is a show with a legacy of outlandish soap opera moves so it’s at least possible he somehow survived.

Maybe he got out of the car to go for a walk before it exploded, and he was knocked the opposite direction as Elena. Or maybe Season 4 will open with him in the shower, in a nod to when Duffy showed up there at the end of Season 9 on the original “Dallas.”

That marked the groundbreakingly bizarre decision on the part of the creators to simply erase the entire previous season, which had seen his character Bobby die. Christopher is his son, so it would be a fun nod to the most surreal and goofiest moment on the over-the-top primetime soap, but somehow we’re not so confident that’s how things will turn out.

The biggest question, though, is if we’ll find out at all. TNT has yet to make a decision on the fate of “Dallas.” Ratings have been consistent this season, hovering just below 2 million viewers, but that’s indicative of yet another year-to-year slip.

“Dallas” has seen its ratings drop on average for each of its first three seasons, and that’s certainly not a sustainable trend. Perhaps DVR and streaming viewership are enough to offset the live viewer erosion over the years, but it looks like TNT is waiting to see if there’s an uptick in viewership after it hyped a character death in this season finale.

If it does end here, there are going to be a lot of frustrated fans. The first hour seemingly wrapped up a lot of major storylines, while the second one blew everything up — literally in one case — creating new alliances and a much darker John Ross, which will be fun to watch if it returns.