Just two years after Susan Sontag wrote her 1964 essay “Notes on Camp,” the musical “Dames at Sea” opened at the tiny Manhattan cabaret Caffé Cino. The so-bad-it’s-good aesthetic had been given a name, and college students began to discover some of the lesser works of Hollywood’s golden age.

The Busby Berkeley musicals that “Dames at Sea” spoofed weren’t classic fare like John Ford’s Westerns or Alfred Hitchcock‘s thrillers. They were dopey musicals you watched in order to flex your intellectual superiority after a hard day trying to read Kierkegaard.

In 2015, how are we supposed to enjoy “Dames at Sea,” which opened Thursday at Broadway’s Helen Hayes Theatre? With its modest cast of just six, the show doesn’t even attempt to replicate Berkeley’s big art-deco productions numbers, which, in their repetition of the female form, neutered scantily clad chorus girls.

Also Read: NeNe Leakes to Return to Broadway in 'Chicago'

What we’re left with in “Dames at Sea” are the plots of movies like “Footlight Parade” and “The Golddiggers of 1933,” and few moviegoers, even in 1933, watched these movies for their let’s-put-on-a-show plots. People watched them for Berkeley’s spectacular production numbers, usually held for the last reel — for obvious reason.

These musicals also featured a bizarre movie duo: Dick Powell always looked slightly embarrassed, as if he couldn’t wait to escape and go on to make the film noir classics that would show his true hard-edged talent. He typically played opposite Ruby Keeler, a clunky singer and dancer, whose talented extended no further than her marriage to Al Jolson.

In the new revival of “Dames at Sea,” Eloise Kropp and Cary Tedder play Ruby and Dick, respectively. Unlike Keeler, Kropp can sing and dance; unlike Powell, Tedder probably won’t go on to play Philip Marlowe. 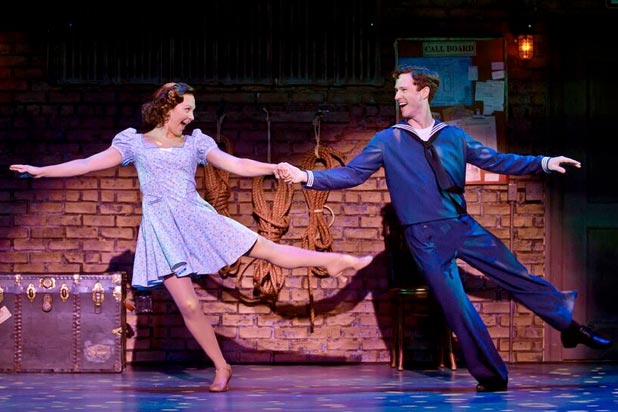 In the “Golddiggers” movie, Ginger Rogers sings “We’re in the Money” in Pig Latin. There’s nothing that deliciously low in “Dames at Sea,” as directed and choreographed by Randy Skinner. Book writers George Haimsohn and Robin Miller make jokes that play on the leading man’s name or that rhyme Louis XIV with V.I.P. It’s not fun to feel superior to such material; it’s numbing. As for Jim Wise’s “Dames at Sea” score, quick: Hum a tune from this nearly 50-year-old musical. The repetition of the music is in a contest only with the repetition of the Dick jokes.

Between 1966 and now, Woody Allen gave us “Bullets Over Broadway,” and Dianne Wiest‘s Helen Sinclair completely overshadows the resident diva of “Dames at Sea,” Mona Kent (Lesli Margherita being loud instead of funny).

In act two of this revival, set designer Anna Louizos delivers a ship that resembles what you’d expect in a production of “Anything Goes.” That’s a real problem. When Charles Busch (or Charles Ludlam before him) does a send-up of old movies, part of the fun is seeing how he fudges on the production values. Given a full-scale Broadway set here, we only notice that a couple dozen chorus girls failed to show up.