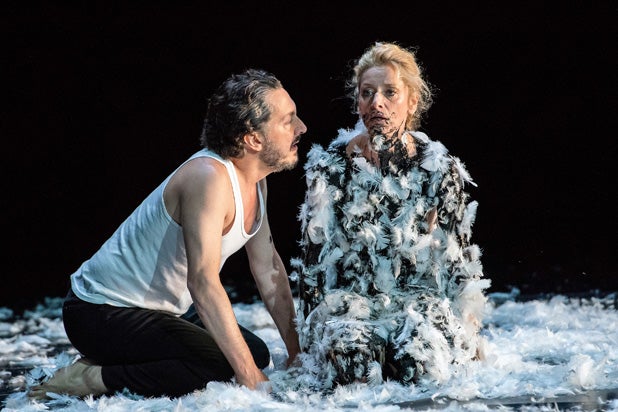 J.K. Rowling and the late Luchino Visconti suddenly have something in common. You need to have ingested several of the “Harry Potter” novels and movies to know what’s going on in the current Broadway play “Harry Potter and the Cursed Child.” Likewise, you need to have seen Visconti’s 1969 film about Nazis to know what’s going on in Ivo van Hove’s “The Damned,” which opened Tuesday at the Park Avenue Armory.

Actually, dramaturg Bart Van den Eynde has toned down the character of Martin von Essenbeck, who, as played by Helmut Berger in the film, offered a veritable smorgasbord of sex. (No “author” is given for van Hove’s production, although it’s reportedly “based on the work of Luchino Visconti, Nicola Badalucco, and Enrico Medioli,” the team responsible for the screenplay.)

In the film, Martin takes out his frustrations for being the spoiled grandson of steel titan Joachim von Essenbeck by not only bedding a local wench but little girls, a manservant and his widow-mother, Sophie — whose lover, Friedrich Bruckmann, is in cahoots with her to wrest away the family business and, in the process, fully embrace Hitler. But what really makes Martin the black sheep of the family is that he dresses up like Marlene Dietrich in “The Blue Angel.”

In van Hove’s “The Damned” (or is it Van den Eynde’s?), Christophe Montenez’s epicene Martin wears eye makeup and high heels at Grandpa’s birthday party, but otherwise keeps it very same-sex with the girlfriend and the little girls (the depiction of pedophilia on stage is much more graphic and prolonged than in the film). And he doesn’t bed mom; rather, he tars and feathers Sophie (Elsa Lepoivre) after she has had several relatives murdered in her climb to the top.

Whenever someone is offed, he or she is walked to one of six coffins at the side of the stage. Not only is the march to the graveyard documented by one of two cameramen, each slow death by asphyxiation inside the coffin is projected onto a large upstage screen. Since we watch each agonizing Edgar Allan Poe-style death in close-up, one wonders whose ashes are being poured simultaneously into the large downstage urn as steam rises and a piercing “Sweeney Todd” whistle signals the news.

Also Read: 'Trainspotting' Theater Review: The Needles Are Real, the Other Stuff Is Not

Other over-the-top displays of theatrical derring-do include the following: Martin spreading his naked body with the ashes of Sophie and Friedrich’s victims, Martin’s uncle (Denis Podalydes) and a very hunky Brownshirt buddy (Sebastien Baulain) soaking themselves in beer (smells like beer) and then fake blood to depict the Night of the Long Knives, several photo-cam shots of the audience (pointing to themselves onscreen), and a long mobile shot of Lepoivre as she leaves the auditorium to wander the halls of the Armory (doubling beautifully as the home of a wealthy Nazi) and runs out onto Park Avenue, where (at my performance) she frightens a woman walking her terrier.

The effects range from stunning to ridiculous to stunningly ridiculous.

Van Hove is beginning to repeat himself and others. With the simple use of a large mirror, Hal Prince more effectively made the audience a co-conspirator in the original 1966 production of “Cabaret.” And Podalydes and Baulain’s wet dance replicates Michael C. Hall’s juicy slide in van Hove’s production of “Lazarus.”

What with all the Nazi sex and murder going on, “The Damned” isn’t a colossal bore like van Hove’s 2010 revival of “The Little Foxes” at the New York Theatre Workshop. But under his direction, both dramas are reduced. Van Hove is great when he tackles a classic tragedy. But “The Damned,” when you strip away Visconti’s incredibly dense mise-en-scene, is nothing more than “The Big Foxes” in this cut-down version.

At their heart, both are melodramas about absolute villains and total victims absence any nuance. And without any subtext for van Hove to play with or bring to the fore, his staging turns into flashy window dressing. Instead of following the drama, we wait for the next big set piece to arrive and titillate.

In between the beer-sliding and the ash-dumping and the whistle-blowing, the actors perform not for us but the cameramen. They give subtle performances, and often times real tears drop on cue. But sometimes that big movie screen isn’t showing the actors in close-up. Instead we’re watch a Nazi documentary on steel production or photos of the Holocaust, or the camera’s image freezes on a dining room table or an inanimate prop, or the screen simply goes black.

Meanwhile, the actors are still performing scenes for a camera that’s focused elsewhere. The actors are well-rehearsed; the camerawork, on the other hand, is pretty sloppy. And often it’s difficult even to tell who’s talking, since the sound is all loud and homogenized.

“The Damned” comes to the Armory from the Comedie-Francaise, and is performed in French with English surtitles.