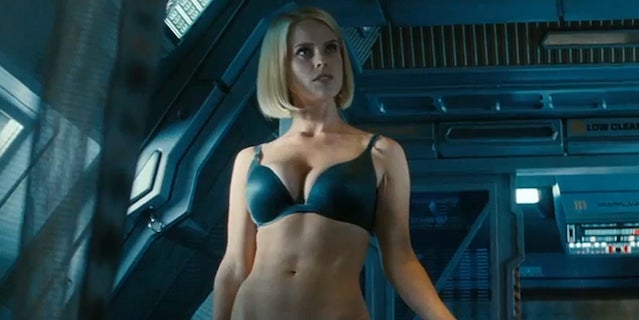 "Star Trek Into Darkness" co-writer Damon Lindelof has kind of, sort of apologized for anyone offended by the gratuitous display of Alice Eve's nearly-naked body in movie theaters (and the movie's marketing) around the world.

"I copped to the fact that we should have done a better job of not being gratuitous in our representation of a barely clothed actress," Lindelof wrote on Twitter on Monday night.

Given the fact the image in question was featured in numerous trailers leading up to last week's release, moviegoers knew Alice Eve's character, Dr. Carol Marcus, was stripping down at some point.

But when the moment finally arrived, viewers were left wondering why it was ever written or shot, other than a blatant attempt to inject the Paramount franchise with some sex appeal.

"I feel like I have to start with the biggest mystery/conversation that's surrounded the film from the get go," Horowitz wrote. "Why is Alice Eve in her underwear at one point?"

"Why is Alice Eve in her underwear, gratuitously and unnecessarily, without any real effort made as to why in God's name she would undress in that circumstance?" Lindelof responded. "Well there's a very good answer for that. But I'm not telling you what it is. Because… uh… MYSTERY?"

In the film, Marcus undresses behind Kirk (Chris Pine) while changing into a suit more appropriate for the climate outside of the Enterprise. Even though she tells Kirk to turn around, the curious womanizer can't help but sneak a peek at the scientist's bod.

While addressing the issue to his Twitter followers, Lindelof compared the scantily-clad scene to others in both "Star Trek" movies where Kirk was in his skivvies.

"We also had Kirk shirtless in underpants in both movies.  Do not want to make light of something that some construe as mysogenistic," Lindelof continued to tweet. "What I'm saying is I hear you, I take responsibility and will be more mindful in the future."

"Also," he added. "I need to learn how to spell "misogynistic."