Dan Stevens may be the perfect man for a woman played by Maren Eggert. He’s handsome, charming and as seen in his introduction for the “I’m Your Man” trailer, speaks perfect German. The only problem is, he’s a robot.

Literally, “I’m Your Man” stars Stevens as a lifelike humanoid robot that has been designed specifically to be one woman’s perfect life partner tailored to her every need. She’s not interested in marrying a machine, but he’s assigned to live with her for three weeks so that she can obtain funding for a project. But the film explores the ideas of modern love and relationships and what it even means to be human in the present day.

“You may not realize this, but you treat Tom like a machine. Do you understand why this is,” a service employee for the company that designed the robot says. “Could you be underestimating him?” 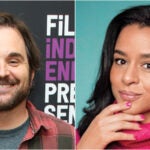 “I’m Your Man” is a romantic comedy in the German language directed by Maria Schrader, who American audiences will know for directing the Emmy-winning miniseries “Unorthodox.” And she’s also directing the upcoming Weinstein-investigation film “She Said.”

Schrader co-wrote the screenplay with Jan Schomberg, and the film will screen at the Toronto International Film Festival after it debuted in competition in Berlin and won the Best Acting prize for Maren Eggert.

Check out the first trailer, with the introduction by Dan Stevens, here and above.