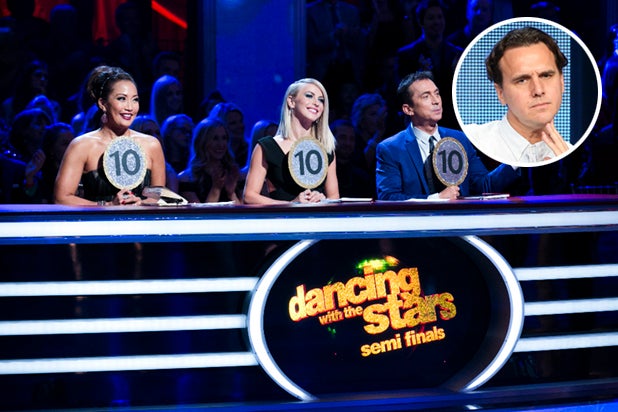 “Dancing With the Stars” will wrap its 21st season on Tuesday, making it one of the most successful reality competition shows on television.

According to executive producer Rob Wade, a big part of that was the fact that the show got there first. Having been on the air since 2005, “Dancing With the Stars” laid claim to a space in reality TV very early on, which put its imitators at a serious disadvantage.

“We were just kind of first to the party,” Wade says in an interview with TheWrap. “Being the first one out and the first one that people loved is a huge benefit. I mean, there hasn’t been a new reality hit in the competition space in a long time.”

Also read: 'Dancing With the Stars' Career Bump: 11 Contestants Who Tangoed Their Way to Success (Photos)

Read the full interview below, in which Wade looks back on Season 21, explains what they look for in casting and responds to criticism about the contestants’ level of stardom:

How have you felt about Season 21 so far?
It’s been good. From a production point of view, it’s been tough. Because for the first time ever in 21 seasons, we’ve had two people eventually drop out because of an illness. We’ve had Kim Zolciak and then later on we had Tamar Braxton … You don’t really know what’s going on. You’re kind of relying on information that’s usually coming through an agent or manager. You’re never quite sure what’s going on, and you’re supposed to be making judgement calls on this from a distance.

Two highlights of the season for me have been the premiere opening number when we went to Hollywood Boulevard, and had thousands of people dancing in our opening number that leads to the ballroom … And then the finale, we’re actually outside for the first time ever. It’s an enormous finale, and we’re expecting to get about 10,000 people there. Just from a scale perspective, I’m incredibly excited for that … So in many ways, it’s been a season of experimentation I guess. It’s been an exciting season to make.

What has the reaction from the fans been like?
It’s been good. I think every time we try something new and different, we seem to get a really, really positive reaction for it. People responded very well to the new themes and the new challenges … We did a dance-off in which America sort of voted in real time on who to send home, which got an incredible response from people. So by all accounts, people are enjoying the innovation and the changes we’re making, which is good.

Twenty-one seasons into making this show, do you still find things that surprise you about it?
Yes, yes. A hundred percent. I remember being here in Season 2, 3 or 4, and kind of thinking, “Oh, my God, what are we going to do next?” And here we are in Season 21 still doing new things. The format is so good and strong that you can kind of always push the boundaries and do new things. It’s a process, and obviously some things you do work and some things don’t work, but yes. There’s stuff that surprises us all the time. And when you’re making live television, you’re constantly being surprised by things.

Also read: Tamar Braxton Exits 'Dancing With the Stars' Due to Health Problems

What is the decision process when you’re adding new challenges or changing the show?
I think the main thing is you don’t want to go away from the heart of the show. The show’s format is very strong. So you want to keep the heart of the show. Then you’re finding something which is going to really challenge the celebrities and their dance partner … What makes it interesting is when you throw these challenges at them, because it pushes them out of their comfort zone.

Also read: Ailing Tamar Braxton Returns to 'Dancing With the Stars' as Another Contestant Gets the Boot

How big a role does casting play?
It’s everything. And the really annoying thing about it is that it’s a completely indefinite science. You just never know … It’s like putting together a big dinner party, and trying to make sure the chemistry is there. And trying to make sure there’s a balance between all your personalities and characters. It’s a lot of fun, but it’s a lot of stress as well.

Other shows have tried to apply this formula to different sports, like “Splash” with diving, or “Skating With the Stars” with figure skating. Why haven’t they been able to succeed in the same way?
I think dancing inherently, ballroom dancing in particular, has a structure that can be judged and can be played along at home. People can relate to it. Everyone’s tried dancing. Not everyone’s tried to jump off a high platform. I think it’s a much easier skill to judge from your armchair.

I also think we were just kind of first to the party. Being the first one out and the first one that people loved is a huge benefit. I mean there hasn’t been a new reality hit in the competition space in a long time. I think the ones that first existed — “American Idol,” “The Bachelor,” “Survivor,” “Dancing With the Stars” and “America’s Got Talent” — have survived for years. And I think there’s been many imitators of all of those, but they were the first ones out.