Jockey Victor Espinoza made history when he won the Triple Crown riding American Pharoah on June 6. Now he’s taking his talents to the dance floor with new partner Karina Smirnoff.

As one of the contestants on Season 21 of ABC’s “Dancing With the Stars,” Espinoza admitted to TheWrap that he had never danced before he signed up for the show and has found the rehearsals more challenging than he thought.

“It is not easy! The first two days it was fun, then the reality sets in that you really do have to do what they tell you to do. I’ve never danced before ever, I dedicated my life to the track,” Espinoza said. “I was so stiff before, so I figured it would be a good workout — I wouldn’t have to go to the gym and I’d be fit to ride the horses.

“I’ve been rehearsing seven hours a day — I don’t have a life right now.” 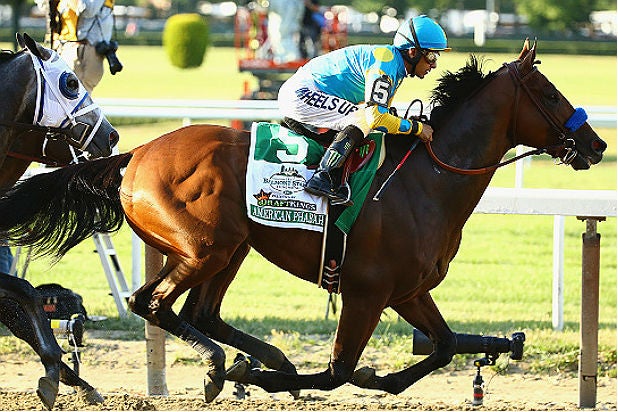 After Smirnoff kept telling Espinoza how easy some of the moves were that he was struggling with, he invited her down to Del Mar Thoroughbred Club on Sept. 5 to show her how hard his real job is. “I’ll teach her how to ride but it will take me more than two weeks,” he joked.

Along with being the first rider to win the Kentucky Derby, Preakness and Belmont Stakes in the same year since 1978, Espinoza, 43, is the first jockey to compete on “Dancing with the Stars” — and is determined not to add another “first” to his resume.

“I just don’t want to be the first one eliminated. If I make it past Round 1 then I’ll be happy!” the 5’2” reality contestant said.

Whatever happens on the ABC competition show, racing fans are hoping that Espinoza is back in the saddle with American Pharoah at the Breeders’ Cup Classic on Oct. 31 at Keeneland, Kentucky.