From Bond to Broadway. Daniel Craig is making his return to the Broadway stage and will star alongside Ruth Negga in a new production of “Macbeth.”

Craig will star as the titular Shakespearean character, while Negga will be making her Broadway debut as Lady Macbeth. Performances will run at the Lyceum Theatre beginning on Tuesday, March 29, 2022, and will officially open on April 28.

Though this will be Craig’s first role since retiring as James Bond, he won’t be too far from the franchise, as the new “Macbeth” play is produced by 007 producers Barbara Broccoli and Michael G. Wilson, alongside The Shubert Organization and Frederick Zollo. Patrick Daly is executive producing. 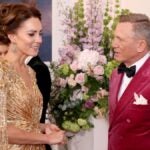 “Macbeth” will run for 15 weeks only. In its story of one couple’s obsession with power, the play will aim to capture “the passion and ferocity of Shakespeare’s most haunting text like never before.”

“Daniel is not only a great film actor but a magnificent theatre actor as well. I am thrilled that he will be supporting the return of Broadway playing this iconic role with the exquisitely talented Ruth Negga making her Broadway debut and under the expert direction of Sam Gold,” Broccoli said in a statement.

“I am beyond thrilled to be participating in this historic season as theatre re-emerges, and to be working with two such masterful actors on one of dramatic literature’s most challenging and epic dramas,” Gold added. “I can’t wait to get started!”

Also Read:
‘No Time to Die’ Slays Early Critics: ‘The Wait Was Worth It’

Daniel Craig is about to hang up his hat as Bond with the 007 feature “No Time to Die,” out Oct. 8. On stage, Craig starred in a 2013 Broadway show called “Betrayal” alongside Rafe Spall and Rachel Weisz and directed by Mike Nichols. His most recent theater stint was an off-Broadway production of “Othello” in 2016 with David Oyelowo and also directed by Sam Gold. And in 2009, he and Hugh Jackman had a 12-week Broadway run of “A Steady Rain.” Some of his other stage credits include “Hurlyburly,” “Angels in America” and “A Number.”

Ruth Negga will next be seen in “Passing” alongside Tessa Thompson on Netflix. She has also starred in theatrical productions of “Hamlet” in 2020 at St. Ann’s Warehouse, for which she received a Drama Desk Award nomination.

See a poster for “Macbeth” below: