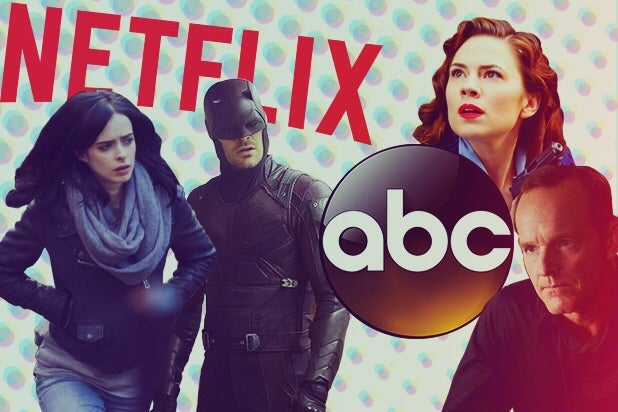 Disney may own Marvel, but Netflix is clearly boss right now.

ABC is struggling in the Nielsen TV ratings, and the Disney broadcaster’s Marvel shows aren’t quite lighting the world on fire themselves. The comic book company has actually found far greater success recently with the streaming giant, and three more key series will all be dumped there soon.

So that’s the good small-screen news for Marvel. Here’s the bad: “Agents of S.H.I.E.L.D.” just posted a sad 1.0 rating/3 share and only 2.9 million total viewers on Tuesday night — both were new series lows.

Also Read: Why This Will Be 'Nashville's' Final Premiere

Fortunately, “S.H.I.E.L.D.” fares better in seven-day delayed viewing, ultimately averaging a 2.4 rating in the key 18-49 demographic this season. Those totals proved just good enough for ABC to bring it back again, granting the show an early renewal alongside 14 other series.

Still, the 2.4 ties “S.H.I.E.L.D.” with “Once Upon A Time” as the lowest-rated ABC dramas to land renewals — not exactly an enviable claim. Additionally, the series is down 14 percent from last year — and it’s dropped much further than where the highly anticipated offering began.

Meanwhile, “Agent ” is performing far worse than the series that spun it off, managing just a 1.3 in the same Nielsen “most current” ratings, which include one week of delayed viewing where available. That terrible total is down a massive 43 percent versus its first season. While “” hasn’t officially been canceled yet, it might as well have been.

Netflix obviously is not measured by Nielsen, nor does the service offer internal viewership numbers. That said, content boss Ted Sarandos would probably swear sans substantiation that both shows are big hits, as he does.

Critically, the story isn’t much different.

The first run of “Jessica Jones” received an 81 Metascore from critics and a 7.9 User Score; “Daredevil” Season 1 got a 75 Metascore and 8.7 User Score.

Meanwhile, “S.H.I.E.L.D.’s” comparable first season had a 74 from critics and a 6.6 from fans. The the initial “” episodes managed just a 72 Metascore — the lowest of all four shows studied. It did, however, land a 7.9 from users, which ties it with “Jones.”

In addition to debuting the disappointing “” since striking a Netflix deal, Marvel has launched an animated “Guardians of the Galaxy” on Disney XD. Plus, Marvel currently has a pilot order at ABC for “Most Wanted.” (And away from the mouse, Marvel also has a pilot for “Legion” on FX.)

In November 2013, Disney/Marvel and Netflix inked an agreement for four series and one miniseries. That will be fulfilled when “Luke Cage” (Sep. 30), “Iron Fist” and “Defenders” drop on the Reed Hastings-run over-the-top service.

“Daredevil” Season 2 debuts in its entirety Friday morning at 12:01 a.m. on Netflix.