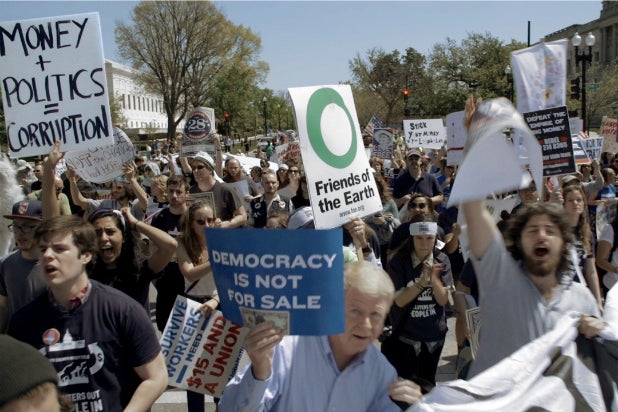 Sure to raise the hackles of anyone bothered by the intense wave of corporate campaign funding that followed the Supreme Court’s 2010 Citizens United ruling, Kimberly Reed’s jigsaw-puzzle documentary “Dark Money” shows how the fight to expose untraceable, unlimited cash in politics was hardest fought in one of the union’s more conservative states, Montana.

Activist in tone, and paced like a thriller, Reed’s movie painstakingly details how an election can be brusquely seized and swayed by unseen forces. Candidates need do little but sign on to be successfully co-opted.

Montana admittedly seems like an unlikely spot for such a battle. But once it was a copper-rich frontier ruled by robber barons who bought and controlled every aspect of the state, including who was sent to Washington. (A copper magnate, of course.) With the passing of the Corrupt Practices Act of 1912, however, Montana transformed itself for the rest of the century into a haven for honesty and integrity in state politics. Meant to correct a tainted past, the act banned corporate spending in campaigns and forced donation disclosure.

One of the state’s U.S. senators, Jon Tester, explains in early scenes (set against the state’s big sky vistas and farmland) that the 1912 law created a state of citizen legislators eager to operate as independent thinkers, be they Republicans or Democrats. But after Citizens United’s declaration of corporate personhood allowed outside interests with anonymous backers to infest local elections, the influx of money routinely tipped scales, even after the state tried to push back with more legislation to undercut the high-court ruling’s effect.

But the damage was already done. Last-minute flyers, robocalls and direct mailings made scurrilous accusations against targeted candidates, turning a teacher or farmer, who may have simply been inspired to run for office out of a sense of civic pride, into an easily defeated cynic. One such flyer against a candidate for state legislature used a picture of John Wayne Gacy to trigger voters’ anti-crime buttons.

If you’re bombarded with mailings from a nebulous entity calling itself Mothers Against Child Predators, what uninformed voter is going to argue with so righteous a cause? It leaves legislatures stuffed with bought candidates who vote in blocs to satisfy their funders, stifling vigorous, free-thinking debate on any issue.

Reed has a lot of ground to cover, and with so many names, commissions, laws, numbers, cases, and history to get into, the flurry of talking heads trying to explain it all can get a bit unwieldy. One becomes grateful for the appearance of a FollowTheMoney.org activist who draws the feedback loop of corrupted influence in simple terms on a whiteboard.

Of course, the flip side of a pummeled, outspent candidate is someone willing to be vetted by a corporation (or by libertarian billionaires like the Kochs) and do their bidding, all while skirting the law that forbids candidates from coordinating with third-party donors. It’s in ferreting out these easily hidden partnerships where “Dark Money” leans into its investigative side. Reed uses as an informed onscreen guide a dogged Montana journalist named John Adams, who gets access to a treasure trove of emails (found in a meth house!) detailing how a nebulous outside non-profit was pulling various candidates’ strings.

The exposure sets up a trial against state senator Art Wittich, a dark money beneficiary, for breaking campaign finance laws. The courtroom footage, complete with tense exchanges and the testimony of a dark-money whistleblower, adds enlivening suspense to the hand-wringing. Though at one point we see Adams lose his staff job in a worsening market for news outlets, his zeal to uncover campaign funding truths leads him to found a non-profit news site, dependent on the support of a concerned populace. Without journalists, “Dark Money” makes evident, it becomes that much easier to shield these transactions from view.

“Dark Money” may be focused on a local battle in a sparsely populated state, but it’s a story that should crowbar open the eyes of anyone affected by the increasing power of corporations in all corners of life, and their obliviousness to what citizens might really want. A constant reminder for Montanans of the true cost of moguls getting their way opens and closes the film: a poisoned copper quarry that’s killed hundreds of wild geese, and routinely threatened the health of nearby residents.

As “Dark Money” makes infuriatingly clear, we can’t have our elections turned into a similarly toxic swamp.