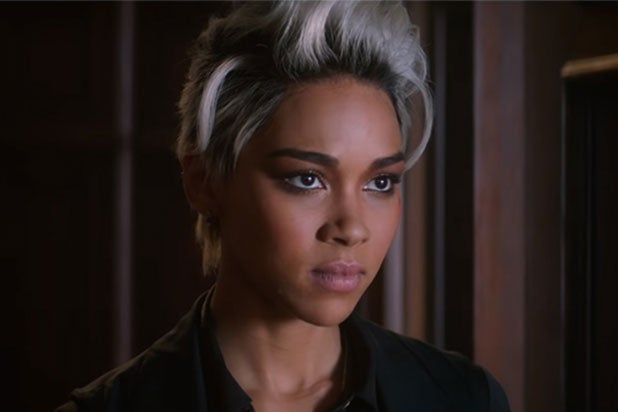 “Dark Phoenix” star Alexandra Shipp would play the X-Men character Storm over and over again if she could — and if she couldn’t, there’s another mutant she’d want to be.

“I’d want to be Quicksilver,” the actress told TheWrap. “My dad was a hurdler and my brother ran track — plus, Quicksilver is so funny!”

Evan Peters reprised his role as the mutant with superspeed in “Dark Phoenix,” alongside Sophie Turner, Michael Fassbender, James McAvoy, Jennifer Lawrence, Nicholas Hoult and Jessica Chastain. “Dark Phoenix” marks the end of the Fox series of the “X-Men” films, given Disney’s acquisition of the studio, and thus, the future of the franchise is kind of up in the air right now.

Also Read: Does 'Dark Phoenix' Have a Post-Credits Scene?

“I definitely cried,” Shipp said when asked how she felt on the last day of shooting. “It didn’t feel like an end to an era, though, because Disney hadn’t purchased Fox at the time so it was just like summer camp was ending, and it was one of those feelings, like, ‘I’ll miss you guys!’ We definitely felt it at the premiere though, like, ‘Yeah, this is the end.’ It’s bittersweet.”

Shipp’s character is able to manipulate the weather through the Earth’s electromagnetic field — her biggest asset is her ability to generate lightning and mist. In “Dark Phoenix,” she uses her powers in massive fight scenes, scenes that required a lot of mental and physical preparation.

“Before we started shooting, I was working out every day and then when I got on set, I started working out with the set team to make sure I knew the choreography and the wire work, and I wanted to do the stunts right,” she explained. “Everything was cohesive, so I was working out excessively… The train sequence was really fun, but the most fun was the fight scene with Ariki (Andrew Stehlin). He does incredible stunts, and he was so kind and so loving — there were moments when we were training and he told me, ‘You aren’t really hitting me’ and I was like, ‘I don’t want to hurt you,’ and he laughed in my face and said, ‘You’re not going to hurt me.’ I hit him and NOTHING happened. He then asked, ‘Are you good?’ Can I tell you? It felt good!”

Also Read: Everything You Need to Know About the Messy 'X-Men' Timeline After 'Dark Phoenix'

Overall, Shipp says “Dark Phoenix” felt different than “X-Men: Apocalypse,” in which she also played the mohawked superheroine, because the characters were more grounded in reality.

“This was a type of movie where we focused on the characters and not just their power — it was about their story and that was my favorite part,” she said. “These were people who had powers but didn’t want to be heroes, which is also something to say about the franchise — we play into the fact that we are a group of others that are just trying to live, and we’re not looking to be praised as heroes — it’s a plus, but we are just looking to be accepted in society.”

Shipp will next star in Tim Story’s “Shaft” alongside Samuel L. Jackson and Regina Hall, as well as “All the Bright Places,” “Lexi,” “Endless” and “Silk Road.”

“Dark Phoenix” opened on Friday and grossed $33 million at the box office.