If you went to refill your Diet Coke early in “X-Men: Dark Phoenix,” you may have missed the long-awaited cinematic debut of Alison Blaire, aka Dazzler — one of the most kicked-around characters in the X-Men universe of outcasts.

Almost from the beginning, Marvel had big-screen ambitions for Dazzler. But like so many cinematic dreams, Dazzler’s have been repeatedly dashed, leading to makeshift makeovers, dark trips down industry side alleys, and coulda-been-a-contender moments in the makeup mirror. Dazzler’s failure as a movie star — both in the comics and in real life — has fueled some of the most compelling-yet-forgotten Marvel stories of the 1980s.

I learned about Dazzler in 1985, at the age of 10, though a comic book purchased at a 7-Eleven in the San Fernando Valley. I’ve always thought that the comic book, Ann Nocenti’s “Beauty and the Beast,” should be a movie. We made a podcast about it last year, and if you want, you can listen to it here.

In Nocenti’s vision, Dazzler was jarringly different from every other Marvel character, living on a neon edge between fame and Dirk Diggler’s life in the second half of “Boogie Knights.” Just a few years earlier, her future had looked so bright.

In the late 1970s, Marvel plotted with Casablanca Records to create a character who would cash in on the disco craze. The plan was for Marvel to create comic books centered on the character, and for the label to release songs “performed” by session musicians in the guise of the character. Next step: Hollywood. She would be a triple-threat: Comic-book character, manufactured disco star, and silver-sequined star of the silver screen.

As Marvel’s then-editor-in-chief Jim Shooter explained in his blog:

Disco was big at the time. Virtually every bar with a dance floor played disco, from upscale nightclubs like the Ice Palace and Studio 54, to dance halls like the one seen in “Saturday Night Fever” to local joints. … I assigned Tom DeFalco and John Romita, Jr. to take a shot at creating the character. In my initial discussions with them, I believe, we came up with the notion of giving her light powers, and therefore, being able to provide her own light show. Hence the “Dazzler” part of the name “Disco Dazzler.” 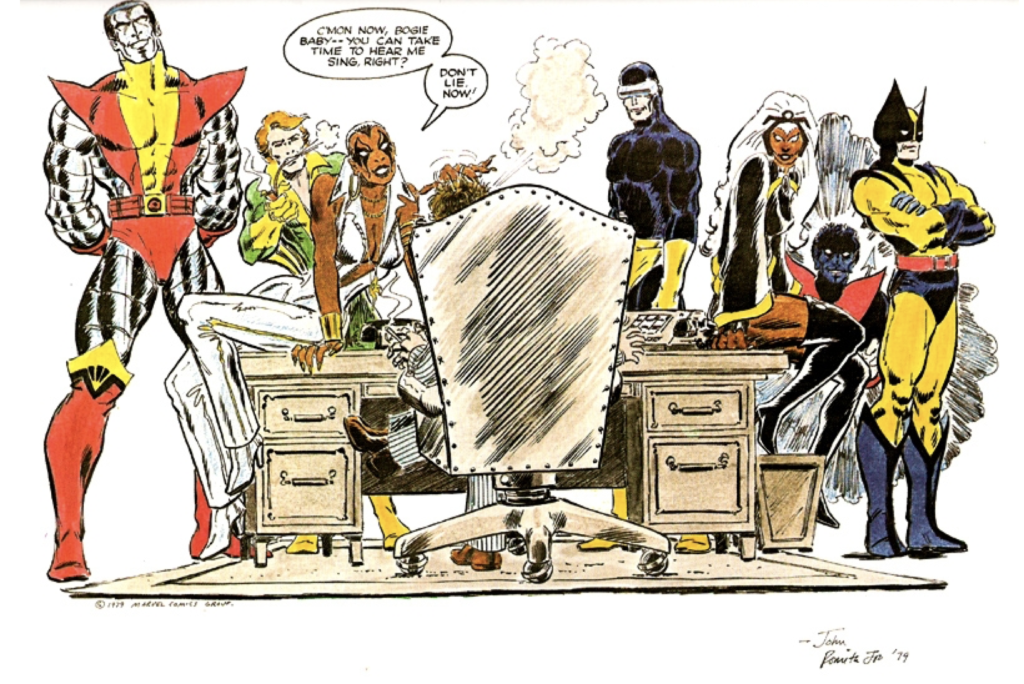 Had Dazzler been an African-American woman like Jones, she would have been one of the few black women featured in Marvel Comics at the time, alongside Misty Knight and the X-Men’s Storm, who both debuted in the mid-1970s.

Though the earliest mutant characters were, like most comic-book characters of the time, white and heterosexual, they often served as comic-book stand-ins for disenfranchised groups like gays and people of color. Writers like longtime “X-Men” mastermind Chris Claremont used mutants as symbols to teach readers about the evil and ignorance of bigotry and hatred. A black Dazzler who performed disco, a genre with deep black and gay roots, might have allowed Marvel to make its points more overtly.

But the Powers-That-Were, in their big-screen ambitions, had become enthralled with Bo Derek, star of the 1979 movie “10,” the one where Derek, in braids, runs to Dudley Moore on a beach. And so Dazzler became a blond white woman, albeit one without braids.

Grace Jones was a very popular singer at the time, and I wanted her to be the basis of the character, because I thought that was realistic. And then, all of a sudden, it became Bo Derek … and that’s when I said, ‘That’s it. They’ve sold out for some whitebread blonde chick.’ She was very hot at the time, but I thought she wasn’t as realistic a choice as Grace Jones was. … If I thought of a nightclub chick, that was Grace Jones.

Dazzler made her big debut in the February 1980 issue of “The Uncanny X-Men,” in the midst of the “Dark Phoenix” storyline that inspired the new film. She was dressed for disco in a white, bell-bottomed white jumpsuit, with blue KISS-like facepaint around her eyes, and blamed the X-Men for ruining a big gig.

Claremont, a brilliant writer who is behind most of the best X-Men stories, sometimes gave his characters wonderfully weird, chummy, comics-that-smell-like vinegar dialogue, flecked with snatches of foreign words and terms of affection I’ve never heard anyone use in real life, like “lover” and “bub.” One of Dazzler’s first lines: “Chuckles, I had one dy-no-mite debut goin’ till you jokers crashed the gate. Now it’s ruined. And for that, sucker, you gonna pay!”

As Shooter explains on his blog, the plan to base Dazzler on Bo Derek almost paid off spectacularly. In May of 1980, he said, Marvel vice president of business affairs Alice Donenfeld went to the Cannes Film Festival, bearing Shooter’s 11-page treatment for a Dazzler movie. Shooter wrote that she managed a meeting with Bo Derek, who, “on the basis of my treatment… agreed to become attached to the project. She wanted to play Dazzler.”

After what Shooter described as a bidding war, things fell apart. (He says a disagreement over whether Derek’s husband John could direct was part of the problem.) It would be 30 more years before mutants arrived in theaters with “X-Men.”

Adding to Dazzler’s misfortunate, the disco backlash arrived on the heels of her debut. (Of course disco lived on, but not as omnipresently as it had before.)

Dazzler’s ability to transform noise into dazzling light was no longer perfectly of the moment. And so the character found herself, like any rising star who suddenly goes cold, alone and adrift in Hollywood.

No, really: In 1982, in one of Marvel’s first graphic novels, “Dazzler: The Movie,” Shooter imagined Alison Blaire as a now-struggling actress, trying to make her way in Hollywood in decidedly pre-#MeToo era. She deals with relentless harassment, and then suddenly another backlash: anti-mutant hatred.

In “Dazzler: The Movie,” Alison Blaire’s film career is torpedoed by the revelation of her mutant powers. She is hated for being different, even as she aspires to mainstream adoration. It’s easy to see her as a metaphor for an actor shunned for coming out of the closet. (Bear in mind that in 1982, almost every gay actor was closeted.)

Nocenti’s four-part “Beauty and the Beast” — that comic book I bought as a 10-year-old — came soon after. I read it a few years ago, and it holds up.

The combatants consider each other family, but go out every night to give each other new scars. When the Beast (played by Nicholas Hoult in “Dark Phoenix”) tries to come to her rescue, he is drugged and forced to fight her for the entertainment of the crowd.

Alison Blair’s struggle for success is all the more emotional because Marvel struggled so hard to make her popular with readers. Just as Dazzler the singer-actress never really took off, neither did Dazzler the character.

At least, not as successfully as the other characters in the “X-Men” films. The “First Class” movies, which conclude with “Dark Phoenix,” have continued the efforts to make Dazzler happen.

In 2016, Sophie Turner (the Jean/Dark Phoenix of “Dark Phoenix”) posted an Instagram image from a deleted scene in “X-Men: Apocalypse” in which Jean and Scott (Tye Sheridan) come across an old-looking Dazzler album.

#FlashbackFriday to that time Cyclops and I went shopping at the mall and found our favorite singer’s album (pre 1989, of course).

That delighted die-hard Dazzler fans, as did 2017 news stories promising a Dazzler appearance in “Dark Phoenix.” But now that we’ve seen “Dark Phoenix,” it appears that Dazzler’s role in the current run of “X-Men” films is even less substantial than her role in Marvel Comics.

Played by Halston Sage, she appears very briefly, during a celebration in the woods near Charles Xavier’s School for Gifted Youngsters. Dazzler is dressed as in her print debut: jumpsuit, blue facepaint around her eyes, surrounded by light. There are glimpses of her around the 2-minute mark of Emeli Sande’s video for “Extraordinary Being,” from the film:

But Dazzler seems oddly out of place at that party in the woods, given that the film is set in 1992. Her costume is straight from a 1980 comic book, and the beautiful, ethereal dance music that plays with her light show is out of sync with the so-called “alternative rock” and hip-hop that was taking hold in the early ’90s.

She has no lines, and no one calls her Dazzler by name. It doesn’t seem like she has any records out — so we can assume that deleted “Apocalypse” scene never happened in the X-Men cinematic universe. Scott and Jean would probably have mentioned it if a huge star had shown up at their party in the woods in upstate New York.

And so, after 40 years, Dazzler finally gets to be in a movie. But she still isn’t a movie star.

She deserves better. Fortunately, she will soon get an animated series, “Marvel’s Tigra & Dazzler Show,” on Hulu. But even that seems like another twist on the big-screen dream: Marvel spent 40 years trying to make her a star, and she ended up a cartoon.

It’s probably too late for a left-field Ann Nocenti adaptation, one that captures the desperation, cruelty, and redemptive friendships that marked the 1980s X-Men. But Disney should think about it: The company’s next “Beauty and the Beast” could trade Belle and Gaston for a pair of star-crossed mutants.