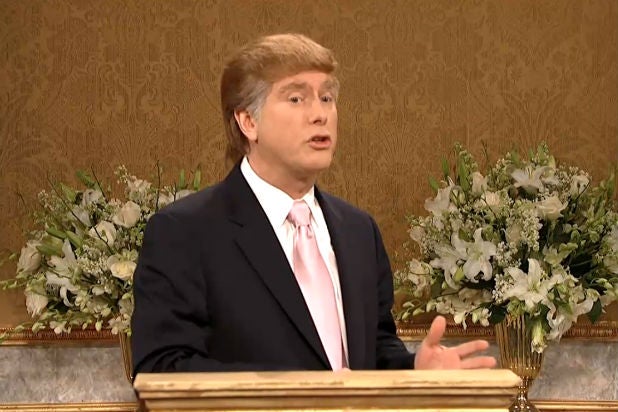 “Saturday Night Live” is coming off one of its buzziest seasons in recent years, thanks in part to Alec Baldwin stepping in to portray Donald Trump. But the transition wasn’t easy for Darrell Hammond, the NBC sketch show’s announcer who previously played Trump on the show.

Hammond told the Washington Post that he broke down in tears when “SNL” producer Steve Higgins told him during the summer of 2016 that Baldwin would be supplanting him. This followed Hammond having closely studied the now-president on the campaign trail with the expectation of donning the signature hairpiece and red tie in Season 42.

“I just started crying,” said Hammond, who stepped away as a regular “SNL” cast member in 2009. “In front of everyone. I couldn’t believe it. I was in shock, and I stayed in shock for a long time. Everything wiped out. The brand, me, what I do. Corporate appearances canceled. It was a hell of a shock, and all of it was apparent to me in one breath. ‘That ends me.'”

Hammond pointed out that doctors wrote several prescriptions to help him avoid drinking, as the performer had previously struggled with substance issues. He said that he wanted to avoid dwelling on losing the gig, but that it seemed impossible to escape.

“I couldn’t get on an elevator, couldn’t walk through a lobby, couldn’t turn on a television, couldn’t walk down Broadway, couldn’t go to my favorite diner, couldn’t go anywhere,” Hammond said. “People would literally pull up in their cars on the way to Lincoln Tunnel to say: ‘What the hell happened? What in the world? Are you OK?’ Like, ‘Why would you give that job up?'”

Hammond, who ended up moving to L.A. from New York for a fresh perspective (he records the show’s announcements remotely), explained that he was hurt that “SNL” creator Lorne Michaels had asked Higgins to deliver the news instead of doing so himself.

For his part, Michaels told the Post that he wanted the show’s post-election Trump to have a different tone than Hammond’s, given that viewers impressions of the real estate mogul have changed.

“I needed another force, on an acting level, to have the power that Trump was embodying then,” Michaels said. “The Darrell Trump … it wasn’t the Trump that had gotten darker. It was the Trump from ‘The Apprentice.'”