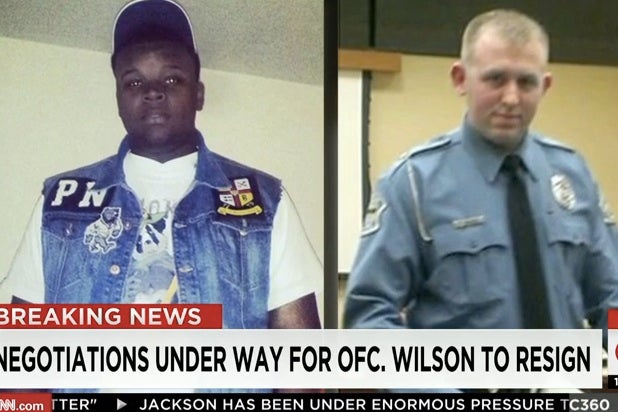 On Monday, a grand jury chose not to indict Wilson for shooting to death 18-year-old Michael Brown on August 9th, 2014.

In an exclusive interview with ABC’s George Stephanopoulos, Wilson said he had a “clean conscience,” and he “did what he was trained to do.”

The St. Louis Dispatch posted a statement from the officer.

“I, Darren Wilson, hereby resign my commission as a police officer with the City of Ferguson effective immediately. I have been told that my continued employment may put the residents and police officers of the City of Ferguson at risk, which is a circumstance that I cannot allow. For obvious reasons, I wanted to wait until the grand jury made their decision before I officially made my decision to resign. It was my hope to continue in police work, but the safety of other police officers and the community are of paramount importance to me. It is my hope that my resignation will allow the community to heal. I would like to thank all of my supporters and fellow officers throughout this process.”

CNN and Fox News have both reported the news; MSNBC is currently airing “Caught on Camera.”

Wilson’s resignation is not a surprise to most police officials and media critics, who’ve deemed the officer too polarizing to put back on the streets of Ferguson in the aftermath of the national firestorm Brown’s killing created.

Wilson, of course, was the officer who shot Brown a reported seven times for what he says was self-defense in response to Brown attempting to go for his gun, and kill him. Once Wilson shot Brown the first time, Brown ran away, Wilson claimed. The officer says Brown then turned around and charged back at him, leaving  him no choice but to shoot him several times, ultimately killing the teenager.

On TV, print, and online, most commentators and activists have found Wilson’s version of events hard to believe, while many suggest he did nothing out of ordinary police procedure during the altercation with Brown.

After a grand jury chose not to indict Wilson Monday, riots ensued in Ferguson, Missouri, where the altercation occurred, and later spread throughout the nation.  Hollywood celebrities also participated in their own way, with “Fruitvale Station” Director Ryan Coogler organizing #BlackoutBlackFriday; a boycott against shopping on Black Friday in protest of Wilson’s non-indictment.

The shooting and killing of Michael Brown by officer Wilson has become a bigger media–and social justice–story than just the August 9th altercation between the two individuals.

It has broadened to a national debate–some might say boiling point–about the way African Americans are treated by white police officers across the country.

TheWrap will have updates if and when Michael Brown’s parents respond to Wilson’s resignation.