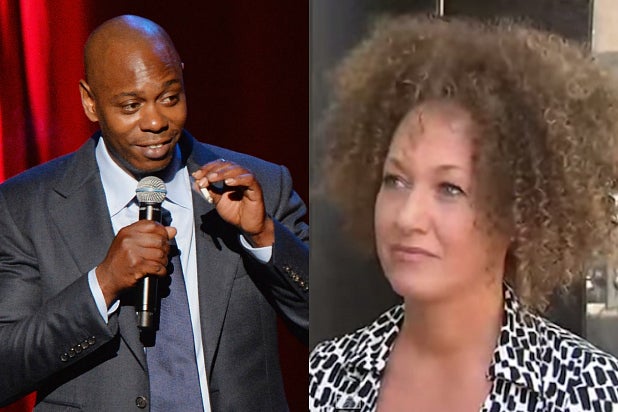 Comedian Dave Chappelle got surprisingly serious while discussing controversial NAACP local chapter president Rachel Dolezal, who is under scrutiny for presenting herself as a black woman, despite both her parents being white.

Although he briefly joked about the widely criticized woman while delivering a commencement speech to George Washington University graduates over the weekend, he got serious backstage when speaking to The Washington Post, and explained why he’s hesitant to joke about the issue during future stand-up gigs.

“The thing that the media’s gotta be real careful about, that they’re kind of overlooking, is the emotional context of what she means,” the former Comedy Central star said. “There’s something that’s very nuanced where she’s highlighting the difference between personal feeling and what’s construct as far as racism is concerned. I don’t know what her agenda is, but there’s an emotional context for black people when they see her and white people when they see her. There’s a lot of feelings that are going to come out behind what’s happening with this lady.”

“And she’s just a person, no matter how we feel about her,” he added. “I’m probably not going to do any jokes about her or any references to her for awhile ’cause that’s going to be a lot of comedians doing a lot. And I’m sure her rebuttal will be illuminating. Like, once she’s had time to process it and kind of get her wind back and get her message together.”

A meeting at which her own organization planned to confront her over the allegations on Monday has been postponed and will be rescheduled “due to the need to continue discussion with regional and national NAACP leaders.”

Dolezal was outed last week by her own estranged white parents, who said on “Good Morning America” Monday that it’s “puzzling” why she has been living as a black woman for the past decade.

“Of all of Rachel’s faults and malicious fabrications, this is definitely the worst,” her mother, Ruthanne Dolezal, said. “Rachel is trying desperately to destroy her biological family.”

Chappelle did display a sense of humor over the issue. The “Chappelle Show” star, who once held a race draft on the sketch program, said Dolezal would be drafted black.

“We would take her all day, right?” he said.

On stage, Chappelle also couldn’t resist mentioning her to the graduates he was speaking to.

“The world’s become ridiculous. There’s a white lady posing as a black lady,” he said. “There is not one thing that woman accomplished that she couldn’t have done as a white woman. There’s no reason! She just needed the braids! I don’t know what she was doing.”