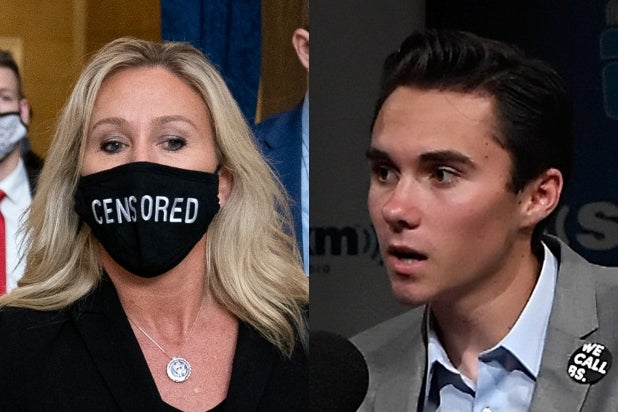 Parkland school shooting survivor and gun control advocate David Hogg weighed in Wednesday as old footage of now-Rep. Marjorie Taylor Greene accosting him on the street went viral on Twitter, calling the scene “embarrassing” for her.

“Lmao how embarrassing a sitting congresswoman argues that an 18 year old is both a more affective lobbyist and communicator than her,” he wrote, adding a laughing-crying emoji. In another tweet, he advised her that with her concealed carry permit, she could “kill” him and prove his points about gun control, but no one could ever “kill” the movement.

In the clip, uploaded to her YouTube account last year, Greene follows Hogg down a Washington, D.C. street for over one minute and demands to know how he secured media coverage and meetings with lawmakers. She also calls him a “coward,” informs him she has a concealed carry permit and suggests he’s being paid by a shadowy, anti-gun figure.

Hogg also said, “After surviving gun violence this is just 1/10 of 1% of the harassment advocates for gun control have to deal with.”

He was far from the only person to comment on the clip, which was resurfaced Wednesday amid reports that Greene used her Facebook account to support calls for violence against elected officials like House Speaker Nancy Pelosi before her own election. She was already trending on Twitter because of those reports Wednesday morning, but the topic quickly expanded to include her old Parkland video as prominent figures took note.

Fred Guttenberg, a gun control advocate whose daughter Jaime died in the Parkland shooting, tagged Greene’s Twitter account and asked, “is this you harassing @davidhogg111 weeks after the Parkland shooting, that my daughter was killed in & he was in? Calling him a coward for ignoring your insanity.  I will answer all of your questions in person. Get ready to record again.”

Last week, Parkland shooting survivors and victims’ families publicly called for Greene’s resignation after old Facebook comments of hers were resurfaced. According to screenshots obtained by Media Matters for America, Greene agreed with another Facebook user that the attack was a “false flag,” or an attack done intentionally to place blame on a second party.