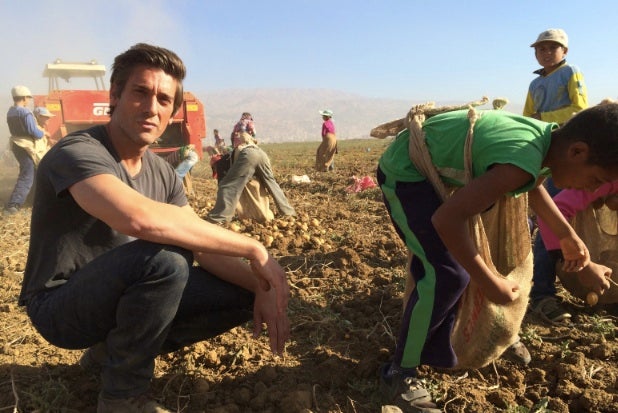 2014 was a life-changing year for ABC’s David Muir as he realized his boyhood dream of anchoring the evening news. On Labor Day, Muir succeeded Diane Sawyer as the anchor of ABC’s “World News Tonight” after years as the evening news’ weekend anchor and correspondent for the network, though even that couldn’t keep him behind a desk.

Muir took a moment at year-end to talk with TheWrap about how no anchor desk will ever tame the natural roving reporter, and take a look back at his momentous year at ABC.

“I’m not some guy in a suit behind a desk every night; I’m still every bit the reporter that I was for many years at ABC before I happened to be sitting there every night at 6:30,” Muir told TheWrap. “If I wasn’t doing reporting, I think the viewers would say, ‘What happened to this guy?'”

Since taking over, Muir has walked the walk, reporting from the Syrian border on the children’s refugee crisis in his first week as anchor.

“So many American children going back to school or getting ready to; an urgent crisis halfway around the word,” Muir reported on the “stolen childhood” of 600,000 Syrian children left as refugees in Lebanon.

Muir took over as anchor during a whirlwind news cycle, highlighted by the threat of ISIS; protests in Ferguson, Missouri in the aftermath of Michael Brown’s death; the Ebola crisis; the midterm elections, and the Sony cyber attack.

“The first four months or so have been an extraordinary adventure,” he added, crediting his team of reporters, like Martha Raddatz, who reported from U.S. warships striking ISIS in Syria, and Dr. Richard Besser, who was on the ground in Liberia during the Ebola crisis.

Muir is also proud of his show’s success at enterprise reporting, noting that he and his team were the first news crew ever allowed behind-the-scenes at an Apple event with CEO Tim Cook.

“This was the role that David was made for and has been preparing for one way or another since he was 12-years-old,” ABC News President James Goldston told TheWrap. “The way in which he travels and goes into the field is very different than the way it used to be done,” Goldston added, noting what he observed alongside Muir at the Apple event.

“It’s him, one producer, and a camera. He’s the definition of a modern anchor: he travels light, he’s fast on his feet, he’s very flexible, he’s very quick, and I think he’s using that approach to the whole way he approaches the role — by instinct. He has an instinctual grasp of how to broaden the scope of the evening newscast.”

And on a historic day for America, which saw President Obama take measures to restore U.S. and Cuban relations after 50 years of isolation, Muir was the anchor who landed an exclusive with the president.

And he doesn’t hesitate to concede — there were nerves.

“The biggest thing for me, in all honesty, is the respect I have for this job. I did feel it sitting down with the president, but I do feel it often as I walk down that hallway [at ABC]; I’m fully aware of the great names and the great minds that walked down that hallway before me [Jennings, Gibson, Sawyer],” he said. “I really feel strongly; I’m not sitting there announcing the news at that desk, I’m having a conversation with America.”

There’s another group of anchors Muir is fully aware of as well — his competitors at NBC News and CBS News, Brian Williams and Scott Pelley. “I think people who say, ‘Oh no, I don’t pay attention to the ratings’ might not be completely truthful with you,” he said.

“In my wildest dreams, I did not expect we’d be in as competitive a race that we’re in, and I’m grateful that the audience seems to be responding.”