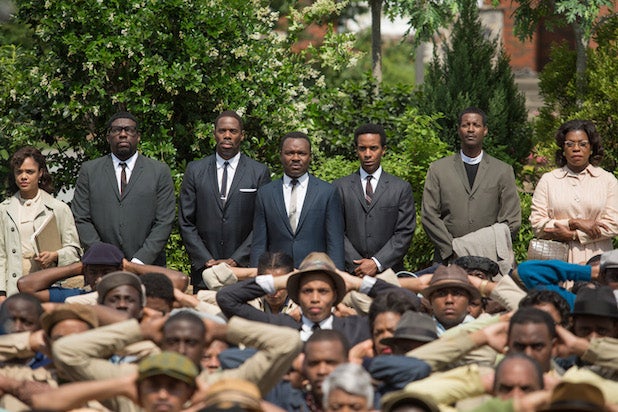 “Selma” star David Oyelowo said that Ava DuVernay’s film suffered at the Oscars because the cast of the film wore “I Can’t Breathe” T-shirts to the film’s premiere in protest of the death of Eric Garner.

Oyelowo, who played Dr. Martin Luther King Jr. in DuVernay’s 2014 fact-based film “Selma,” said that the movie’s release coincided with the death of Garner and that Academy voters were offended by the cast’s political protests.

“I remember at the premiere of ‘Selma’ us wearing ‘I Can’t Breathe’ T-shirts in protest,” Oyelowo said in a Screen Talks panel discussion with Screen Daily. “Members of the Academy called in to the studio and our producers saying, ‘How dare they do that? Why are they stirring S-H-I-T?’ and ‘We are not going to vote for that film because we do not think it is their place to be doing that.'”

Also Read: David Oyelowo to Star in Showtime's 'The President Is Missing' Pilot Based on Bill Clinton-James Patterson Book

“Selma” was nominated for two Oscars, including Best Picture, and won Best Original Song for the John Legend and Common track “Glory,” but it was seen as snubbed for Oyelowo’s performance and for DuVernay’s directing. That particular year in 2015, all 20 of the acting nominees were white, spurring the #OscarsSoWhite conversation.

“It’s part of why that film didn’t get everything that people think it should’ve got and it birthed #OscarsSoWhite,” Oyelowo said. “They used their privilege to deny a film on the basis of what they valued in the world.”

The Screen Talks discussion also turned to awards shows in general, and producer Noel Clarke praised BAFTA’s new adoption of diversity standards that say that if the crew of a film is not diverse enough, the film risks not qualifying for awards. Oyelowo added that the BAFTAs need to separate themselves as just another awards show on the road to an Oscar.

“That’s something to also be thinking about in this moment: Who are we as the British film industry, not just a stop on the way to the Oscars,” Oyelowo said. “Take back the power, BAFTA — I’m just saying!”

Check out the full report from the panel discussion here.