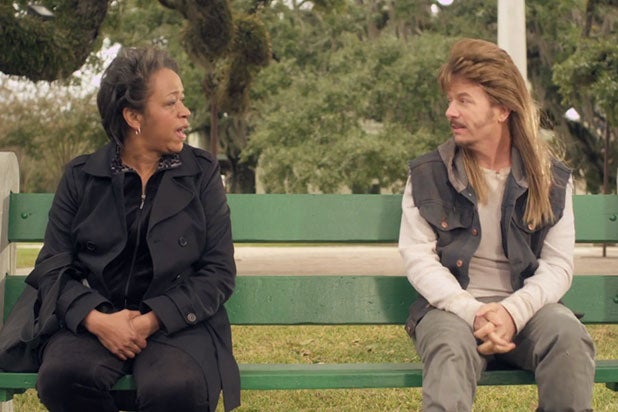 David Spade travels through time in the trailer for “Joe Dirt 2: Beautiful Loser,” in which he reprises his eponymous role 14 years after the first movie hit theaters.

This is the second trailer for the upcoming movie after April’s teaser, which TheWrap reported.

Back to play the “White Trash Appleseed,” Spade isn’t the only one returning to the film, with other cast members from the 2001 original including Dennis Miller, Zander Kelly, Christopher Walken, Adam Beach, Brittany Daniel, Mark McGrath and Patrick Warburton.

The trailer opens by parodying the iconic park bench scene from “Forrest Gump,” with Dirt, like Tom Hanks, recounting to a stranger his life story. The first installment followed Dirt’s quest to find his parents, who abandoned him in the Grand Canyon. In the sequel, after finding love and leading a good life, he’s caught in a tornado which for some reason takes him back to 1965.

Having been ripped from his wife and triplet daughters, Dirt sets out to reunite with them, surviving multiple high-pressure encounters with a biker gang, a crime syndicate and an airplane toilet.

The original “Joe Dirt” was a moderate box office success when it was released in 2001, earning an estimated $30 million against a $17 million budget.

The sequel is produced by Adam Sandler‘s Happy Madison Productions, and is directed by David Wolf. Jaime Burke and Amy S. Kim are producers.

“Joe Dirt 2: Beautiful Loser” is scheduled to premiere on Crackle on July 16.