The first full day of the Tribeca Film Festival was the embodiment of diversity: In the morning, it hosted press and industry screenings of obscure movies like the Asian dramas "Fish Eyes" and "Still Walking."

In the evening, Larry David and the Farrelly brothers walked the red carpet alongside baseball legend Luis Tiant. 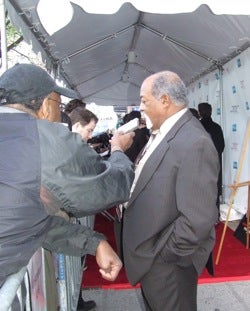 Yet there was a logic to that strange combination of comedic and athletic forces: Peter and Bobby Farrelly produced director Jonathan Hock's "The Lost Son of Havana," a touching portrait of Tiant's journey from Cuba to the United States and back again.

David (pictured below), fresh from the premiere of Woody Allen's "Whatever Works" the night before, just wanted to hang out. While the "Curb Your Enthusiasm" star hilariously shot down inconsequential questions from a reporter with the Daily Beast (Reporter: "Where do you like to go to dinner?" David: "I don't care. Sometimes I'll go out. What else you got?"), Tiant (pictured at left) sauntered down the carpet with a lavish Cuban cigar in hand, relishing journalists and curious pedestrians with lessons from his fascinating cross-cultural odyssey.

I asked Bobby Farrelly if his involvement with his brother as producers of the movie, which ESPN Films recently acquired for television, might lead audiences to expect something closer to their standard gross-out humor routine made famous by "Dumb and Dumber."

"The obvious thing is that [audiences] will think this is a comedy," he told me. "It's really a melancholy story. I would hope they want to be entertained, and it is an entertaining story, so on that note, I hope we delivered."

Strong thoughts from the member of a directorial duo once known for putting fake sperm in Cameron Diaz's hair in "There's Something About Mary." 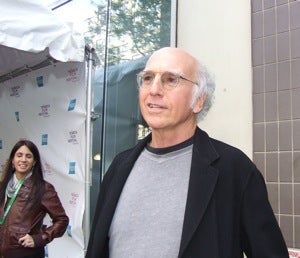 I asked Bobby if he and his brother learned anything from their first encounter with documentary production. "We realized it's all about a story," he said.

On that note, I brought up their biopic of the Three Stooges, which recently attracted Benicio del Toro to play Moe, Sean Penn as Larry, and Jim Carrey (gaining weight) as Curly.

"It's going really well," Farrelly said. "We've worked on the script going on nine years, and finally put together the dream cast we've been looking for. We know it's a huge project that will probably define our careers."

That might seem like an overstatement — but, after all, the evening screening was all about career definition. "Lost Son of Havana" provides a bittersweet portrait of Tiant's plight as he overcomes American racism during his early years in the major leagues. He eventually became the star pitcher for the Boston Red Sox and Cleveland Indians.

Forty-six years after leaving his home country, Tiant returned home to find his remaining relatives struggling to get by. Hock contrasts this reunion with a thrilling timeline of Tiant's rise to fame, including his role in a 1968 All Star game at the Astrodome that allowed his Cuban relatives to pick up the television signal from Miami.

Even non-sports fans will find Tiant's success worth rooting for. Academy Award-winner Chris Cooper (a Tribeca jury member) narrates, guiding audiences from Tiant's early popularity as a strikeout king for the Yankees through his devastating shoulder injury that sent him back to the minor leagues. Those familiar with Anna Boden and Ryan Fleck's recent baseball immigration movie "Sugar" will discover the engaging real life corollary here.

Of course, sports fans are destined to get the most out of the experience, and the Farrellys apparently include themselves in that group. Bobby introduced Hock before the premiere as one of the greatest contemporary documentary filmmakers.

"That was a lot of overstatement from the Farrellys," Hock said as he took the microphone. Bobby shot back with an immediate retort: "That's what we do." Once again, no one could deny the diversity in the room.