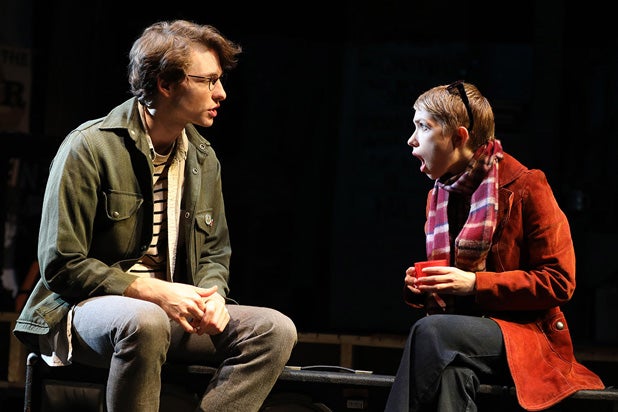 There’s a good full-length two-act play ready to break out of Steven Levenson’s 90-minute “Days of Rage,” which had its world premiere Monday at Off Broadway’s Second Stage.

Richard and Jeff also used to live in this “collective,” and it’s these two other would-be revolutionaries, whom we never see, who suggest a wonderful first act for this oddly engaging but ultimately ungrounded work by the author of “If I Forget” and the book for the Tony-winning musical “Dear Evan Hansen.”

Richard and Jeff come to a bad end off stage in “Days of Rage,” but from what we’re told, they were the real thing in terms of trying to start a revolution. Plus, they also insisted on a very theatrical approach to sex: “There was a calendar. A schedule. Who was supposed to sleep with whom.” Frankly, who wouldn’t want to see that in action on stage?

While somewhat fluid, the sex life of Spence, Peggy and Quinn is much less eye-popping, and they spend their days trying to start the revolution by handing out leaflets for a big march that’s scheduled to take place in the near future in far-off Chicago.

Back in 1969, young people did help to bring about the end of the Vietnam War, eventually, but now those hopeful activists are over the age of 60 and represent a voting block that often prevents anything progressive from happening in the country. That depressing fact lingers around the edges of “Days of Rage.”

Unfortunately, Levenson is a little too eager to expose what Spence, Peggy and Quinn will become, not to mention what’s really cooking inside their middle-class brains in October 1969 (two months before the first Selective Service lottery).  The playwright keeps pulling the Marxist playbook out from under them, and their actions and words, while often amusing, have little consequence.

Since the collective desperately needs money, Spence takes in a stray named Peggy (Tavi Gevinson), who not only carries $2,000 in her small suitcase but is a quick learner in trying to retrace the footsteps of Richard and Jeff. She’s also a brilliant conniver who relishes bringing discord to the collective’s already slightly fraught love life. Gevinson mines the character’s deviousness to great comic effect.

What Levenson builds with Peggy, however, he dismantles with the drama’s fifth character. Playing a Sears employee named Hal, J. Alphonse Nicholson gives a nicely understated performance, but it’s just too convenient to have a young African-American character be the embodiment of reason, morality and common sense that punctures the dreams of pampered white kids.

Trip Cullman directs an accomplished ensemble, and Faist (so memorable in “Dear Evan Hansen”) manages to reveal a few genuine moments of commitment to the cause. Totally absent is any angst about that upcoming draft lottery, however. (I was in college in 1969. It was a big, big deal.)

Louisa Thompson’s scenic design for the collective’s two-story house is massive, and awkwardly moves back and forth on wheels during blackouts to create slightly more space downstage for scenes played on the street. In the end, all that rocking only draws attention to Levenson’s overly episodic drama.

Most disappointing is Levenson’s decision to end “Days of Rage” with Quinn telling Spence what happens to the characters in the decades to come. The writing here is not treacly like Conor McPherson’s tacked-on update for the life of every character in “Girl From the North Country.” Regardless, it’s time for a moratorium on any more final scenes of future nostalgia in new plays.