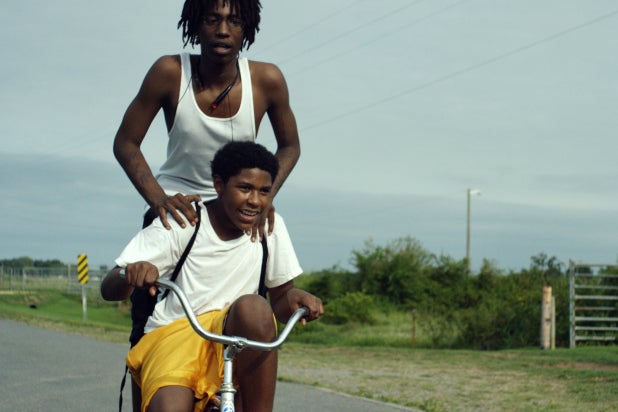 “Everything stupid. Stupid, stupid, stupid.” That’s the first thought we hear from Dayveon (Devin Blackmon), the 13-year-old protagonist of Amman Abbasi’s heartfelt debut. And it’s hard to argue with him.

Dayveon is suffering from so much senseless sadness, he may as well be literally mired in the backroads mud surrounding his Arkansas home. He lives in a bare, isolated cabin with his sister Kim (Chasity Moore), who loves him but is focused on finding work and raising her toddler (Lachion Buckingham Jr).

Dayveon’s father is absent, in seemingly every way. His mother is gone too, perhaps driven mad by grief. The biggest presence in his life remains his older brother Trevor, whose portrait hangs on Dayveon’s wall, perpetually looking over him. Trevor was recently shot and killed.

The one reliable anchor in Dayveon’s aimless days is — or should be — Kim’s boyfriend, Bryan (standout Dontrell Bright). Though he’s quiet and easygoing, it’s clear that Bryan desperately wants to be the father figure Dayveon needs. But Dayveon and his best friend Brayden (Kordell Johnson) are being drawn in another direction, towards the hardened Bloods (including Marquell Manning and Lachion Buckingham) who called Trevor their own.

Though the film’s poignant sincerity balances its flaws, Abbasi’s inexperience is evident in an overreliance on his influences — the most notable being David Gordon Green (“George Washington”), one of the film’s executive producers. Like Green’s poetic Southern dramas, “Dayveon” views rural pain through an elegiac lens.

At times, this approach seems to prioritize mood over matter. Both the lyrical beauty and portentous symbolism can be heavy-handed, as with the oft-viewed beehive in Dayveon’s backyard. And it often feels as though Abbasi put more thought into the obsessively-composed aesthetics than his underdeveloped script.

That said, his ambitions and abilities are equally obvious. (Abbasi serves as writer, director, producer, and composer.) He’s elicited outstanding performances from his entirely-amateur cast, who infuse both authenticity and professionalism into their roles. The warily evocative soundtrack, production design and cinematography (from DP Dustin Lane, also making his feature debut) all heighten the film’s undercurrent of melancholic futility. And it’s impossible to remain unmoved by the many contrasts Abbasi carefully arranges.

When Dayveon is not getting roughly “jumped in” to the gang, he’s likely to be scarfing down Cinnamon Toast Crunch and watching cartoons. He still rides his bike everywhere, like a little kid. And when he shows off his gun, he’s barely able to distinguish it from a toy.

In the most memorable scene, the confused and overwhelmed teen is brought to a strip club and forced to drink until he’s sick, in celebration of a violent initiation. It’s a heartbreaker, watching him teeter perilously towards a potential new life. But it’s also inspiring to watch the work of a talented young filmmaker, and imagine the directions he might take next, too.