DC Films Chief Walter Hamada is staying at DC for the time being after Warner Bros. Discovery decided not to release “Batgirl.”

According to the Hollywood Reporter, which first reported the news, “Hamada has now agreed to remain in his post at least until the Oct. 21 release of the Dwayne Johnson film ‘Black Adam.'” An insider added that there is no time frame for Hamada’s decision and he is taking his time to revaluate the situation. 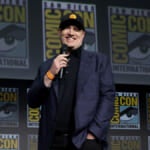 Warner Bros. Discovery decided to axe “Batgirl” after test screening a director’s assembly cut. Made under a previous regime, “Batgirl” was initially designed to be an HBO Max release, and then was being considered for theatrical distribution. Due to COVID issues and shutdowns, the budget ballooned to $90 million.

According to the Hollywood Reporter, “Hamada was upset at not being consulted and concerned about the impact on those involved in making the film.”

According to an insider, the director’s assembly cut of “Batgirl” had the same test score as the first “It” test screening. The first “It” film went on to gross $701.8 million worldwide at the box office.

On Thursday’s earning call, Warner Bros. Discovery CEO David Zaslav addressed the axing of “Batgirl” by saying: “We’re not going to release any film before it’s ready. We’re not going to release a film to make a quarter… the focus is gonna be how do we make each of these films, in general, as good as possible. But DC is something that we think we could make better and we’re focused on it now.”

Zaslav when asked by an analyst about the press surrounding “Batgirl” said that “DC is top of the list” for the studio, and they’re even looking to enact a broad 10-year-plan modeled off of the Marvel model established with Kevin Feige at Disney.

Hamada, who is one of the most well liked executives amongst the talent community, first joined DC Films back in 2018 and lead the division to the release of its highest-grossing film to date, 2018’s “Aquaman,” which grossed over $1.4 billion at the worldwide box office. In 2019, Hamada oversaw production of New Line’s “Shazam!” and Warner Bros. Pictures’ Academy Award-winning blockbuster “Joker,” which has earned almost $1.1 billion at the global box office. In 2021, Hamada signed a multi-year extension through 2023 to remain president of DC Films, overseeing the DC film slate. Most recently, Hamada oversaw Matt Reeves’ “The Batman,” which grossed $769.2 million worldwide during the pandemic, an impressive feat.

Before coming to New Line, Hamada served as a producer and manager with H2F Entertainment. He began his career at TriStar and later became vice president of production at Columbia Pictures. During his decade-long tenure at New Line, he worked on films including “Friday the 13th,” “Final Destination,” “A Nightmare on Elm Street,” “The Conjuring” and “Annabelle” franchises and “IT.”

Warner Bros. Discovery did not respond to TheWrap’s request for comment.