It wouldn’t be an Arrowverse wedding without a nefarious villain crashing the ceremony with some terrifying friends. So naturally, the long-awaited Avalance wedding in “DC’s Legends of Tomorrow,” can’t go off without a hitch.

Series star Caity Lotz kicked off the show’s Comic Con at Home panel on Sunday with a new trailer for the back half of Season 6. And as Sara Lance and Ava Sharpe begin exchanging their vows — “co-captains forever baby!” — the season’s big bad Bishop returned, sending in some wedding crashers.

“It’s gonna be you and me for all eternity, Sara Lance,” he threatens. Of course, Sara Lance is nothing if not tough, even if she has been abducted by aliens (again). From there, more classic “Legends” shenanigans ensue, including extradimensional bowling, board games, aliens, weddings, magic mushrooms, murder mysteries and more.

You can watch the full trailer via the video above. 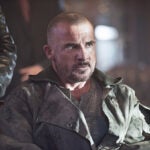 Along with some exclusive footage, the cast and crew also had some big reveals during the panel. As it turns out, Matt Ryan, who’s played Constantine in the Arrowverse, is sticking around a bit longer.

“While John Constantine’s arc on the show is coming to an end in season six, Matt Ryan’s journey with the Legends is not over,” showrunner Phil Klemmer revealed.

Ryan will return as a series regular in season 7, but he won’t be Constantine. He’ll be Dr. Gwyn Davies, “an eccentric scientist from the early 20th century who might be the team’s only hope next season.”

“As everyone who loves him knows, in the end, John Constantine will walk his path alone,” Ryan said. “The time has come for John to part ways with the Legends, and for me to part ways with John. I’m really excited to be creating this new role on the show and having some fun with it — discovering how this new character fits in and causes some trouble for the Legends.”

It was also revealed that Amy Louise Pemberton will join the show in the flesh in season 7. Pemberton has voiced Gideon, the Waverider’s AI, for all six seasons as a series regular. Pemberton has appeared as the AI’s physical form in a handful of episodes throughout the series, but she will now portray a flesh-and-blood version of Gideon in the real world.