(Some minor spoilers ahead for “Deadpool 2,” obviously.)

“Deadpool 2” is the rare superhero movie that’s fully willing to break the fourth wall, not just making jokes in the plot, but making fun of other superhero movies.

Deadpool (Ryan Reynolds) is a Marvel character, and while he has plenty of jokes for the Marvel Cinematic Universe and for Hugh Jackman’s Wolverine, he saves some of his best jokes for making fun of the rival DC movie universe.

Here are all the gags Deadpool drops about the DC movies in “Deadpool 2.”

Toward the beginning of the movie, Deadpool goes through a number of mercenary jobs, taking down bad guys in a bunch of brutal, violent scenes. When he finally gets home to Vanessa (Morena Baccarin) for their anniversary, he arrives a bit late and starts rattling off excuses.

The best one is a big dunk on “Batman v. Superman: Dawn of Justice.” Deadpool tells Vanessa he was” fighting a caped badass, but then I found out that his mom is named Martha, too.” That’s a reference to the battle between Batman (Ben Affleck) and Superman (Henry Cavill). In “Batman v. Superman,” the two caped heroes each believe the other is actually a bad guy, and they come pretty close to killing each other — until they bond over the fact that both their moms are named Martha.

It’s a much-derided plot point, since Batman and Superman don’t actually resolve any of their differences, and “Deadpool 2” perfectly makes fun of a moment that lots of audiences also thought was ridiculous.

Cable is that dark

Ever since “Man of Steel” came onto the scene, the more recent DC Comics movie adaptations have been known as grittier, darker takes on superheroes than those of the Marvel Cinematic Universe. “Deadpool 2” jokes doesn’t let the grittiness escape a joke. At one point during the fight, when Cable reveals he’s from the future, Deadpool asks if dubstep music is still a thing. Cable responds that “dubstep is for pussies.”

“So dark!” Deadpool responds. “You sure you’re not from the DC universe?”

The final DC joke comes at the end of “Deadpool 2,” during its mid-credits scene, which is itself a long meta-joke about Reynolds. It finds Deadpool using Cable’s time travel device to hop around the past, first saving Vanessa’s life, and then “cleaning up the timelines,” as Deadpool puts it.

Deadpool eventually travels back to find the actor Ryan Reynolds sitting at his desk, looking over the script for 2011’s critically panned “Green Lantern.” Reynolds starred in the movie as DC superhero Hal Jordan — but the movie was derided by fans and panned by critics, earning just a 26 percent on Rotten Tomatoes. As Reynolds remarks that the script is about to get him to the big leagues, Deadpool executes Reynolds, because it would be better to die than star in such a terrible DC movie.

BONUS: Above are the jokes Deadpool made at the expense of DC, but “Deadpool 2” also has few references that weren’t so mean. Not everything he says or does is negative!

It would seem that Deadpool has at least some kind of appreciation for DC movies, because in the scene where he and Weasel (T.J. Miller) are interviewing candidates for X-Force, there’s a gun on the wall behind them with the Joker’s BANG flag from the 1989 “Batman” hanging out of the barrel. 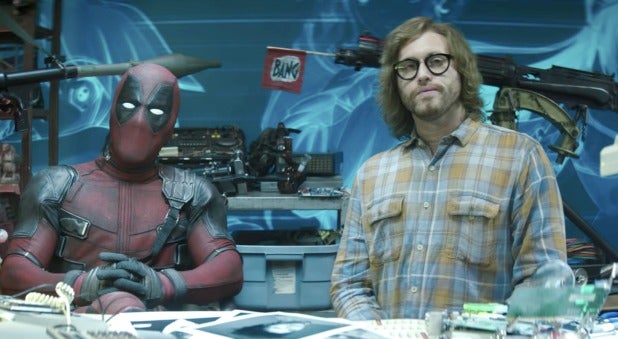 When Cable (Josh Brolin) breaks into the Icebox, a prison for mutants, where Deadpool and Russell (Julian Dennison) are held. When Deadpool realizes Cable is after Russell, he starts fighting to stop Cable from killing the kid. As they start beating each other down, Cable asks, “Who are you?”

Deadpool, responding by putting on a gravely voice, returns with a classic superhero response: “I’m Batman.” It reads like a direct reference to the 1989 “Batman,” in which Michael Keaton’s Caped Crusader gives the same response to a frightened crook as he beats him up during Batman’s first reveal.

When Deadpool and Weasel team up to find people to help save Russell from Cable and form X-Force, they meet Shatterstar (Lewis Tan). The hero explains that he’s an alien from a place called Mojoworld, and that he enjoys hanging out on Earth because it’s nice to be in a place where he’s better than everyone else.

Deadpool tells Weasel that just once, he’d like to go to a planet like that — a place full of “functional idiots,” where he can be their god, “like Superman,” he says.

And that’s all of them. We have no idea how they managed to skip doing a joke about “Jonah Hex,” which was Josh Brolin’s foray into DC movies a while back. Maybe in “Deadpool 3.”