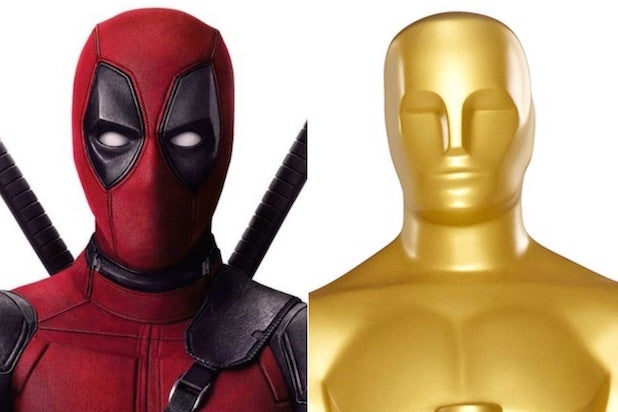 “Deadpool” is now more than 75 percent of the way to an Academy Award nomination for Best Picture.

But sorry, Marvel fans and Ryan Reynolds fans and genre fans of all stripes: It’s not going to get the rest of the way there.

Why not? Because the Academy, that’s why not.

Yes, the comic superhero movie landed a nomination from the Producers Guild of America on Tuesday. Since both groups expanded the number of nominees in their top categories in 2009, more than three quarters of PGA Award nominees have ended up as Oscar best-pic nominees as well.

And yes, it got a Golden Globe nomination for Best Motion Picture – Musical or Comedy, a category that has produced 12 best-picture nominees and two winners in the last five years.

And yes, it was nominated for an ACE Eddie Award, and a Writers Guild Award in the Best Adapted Screenplay category — a category, mind you, in which 14 of the 25 nominees in the last five years have gone on to Oscar best-pic nods.

Obviously, some of that stuff is meaningless when it comes to a film’s Oscar chances. But even the factors that shouldn’t be meaningless — the PGA and WGA and Globe recognition — run into the fact that there’s really no precedent for a jokey, violent superhero movie like “Deadpool” being nominated for Best Picture.

The closest equivalent is probably 2009 nominee “District 9,” which came when the Academy had a flat 10 Best Picture nominees rather than the sliding scale that has produced either eight or nine in each of the last five years.

And to get into the top eight or nine, “Deadpool” would have to leap over at least a dozen films that seem more to the Academy’s tastes, maybe including “Silence,” “Loving,” “Sully,” “Captain Fantastic,” “Patriot’s Day,” “20th Century Women” and “Florence Foster Jenkins.”

Just look at some of the past PGA nominees that didn’t get Oscar nominations: “Star Trek,” “Bridesmaids,” “Skyfall,” “Gone Girl,” “Nightcrawler,” “Ex Machina.”

Sci-fi movies. Genre movies. Comedies. Big commercial movies. Movies, you could say, that all have things in with “Deadpool.”

Maybe, for the sake of argument, ‘Deadpool” is better than “The Force Awakens” and “The Dark Knight Rises.” But it’s still a stylish, funny and pretty brutal genre pic under the critical gaze of a group of voters who’ve never shown much fondness for genre or humor.

The Academy will sometimes embrace genre if it comes from Christopher Nolan (“Inception,” but not “Interstellar”) or George Miller (“Mad Max: Fury Road”) or Ridley Scott (“The Martian”) or Alfonso Cuaron (“Gravity”) or James Cameron (“Avatar”), and this year they’ll probably do it for Denis Villeneuve’s “Arrival.”

Another problem for “Deadpool” is the Academy’s preferential system of counting nominating ballots. Each member can vote to nominate as many as five films for Best Picture, ranking those films in order of preference — but that member’s vote typically counts only for the top-ranked film on his or her ballot, or occasionally for the second- or third-ranked. It doesn’t matter if “Deadpool” is every member’s fourth or fifth choice — to receive a nomination, it needs to be at or near the top of a few hundred ballots, which seems unlikely for a popcorn movie competing with more serious works.

So despite its previous nominations and awards, “Deadpool” will likely have to be content with other categories on the Oscar ballot. Academy members will be perfectly willing to vote for it for Best Makeup and Hairstyling, where it’s currently on a seven-film shortlist.

There’s a slight chance they’ll consider it for Best Adapted Screenplay, though the Academy’s decision to put “Moonlight” in that category rather than Best Original Screenplay made the competition tougher and the odds longer.

And it has an outside chance in film editing and the sound categories (though not in visual effects, where it was eliminated when the field of contenders was cut from 20 to 10).

But don’t despair, “Deadpool” fans: We all know that Ryan Reynolds has got to already be on a shortlist of Oscar presenters.