“Deadpool” is one of those movies that’s all the more successful for how easily it could have gone so very wrong. It’s suffused with an arch, self-aware wit — its titular hero violates the fourth wall more than Groucho Marx, Bugs Bunny and Ambush Bug put together — yet it takes its romance and revenge storylines just seriously enough to keep us engaged.

It’s a film that’s amused with itself, but thanks to a screwball screenplay by Rhett Rheese and Paul Wernick (“Zombieland”) and a charmingly snarky lead turn by Ryan Reynolds, that amusement is both thoroughly earned and completely contagious.

If you loved the way “Guardians of the Galaxy” turned the standard superhero formula on its spandex-covered ear — and you’re old enough to handle some very R-rated language and violence — “Deadpool” delivers a similarly delightful surprise.

Deadpool is a mercenary with a heart of, let’s give him the benefit of the doubt, brass. Created in the comics by Rob Liefeld and Fabian Nicieza — and previously, problematically, brought to the screen in “X-Men Origins: Wolverine” — he’s a mouthy antihero, unbound by the rules of superheroism and frequently prone to quip about the fact that he is a character in a movie, one who would like nothing more than to get his hands on Ajax (Ed Skrein, “The Transporter Refueled”).

Ajax, you see, took a cancer-stricken Wade Wilson (Ryan Reynolds) and turned him into the indestructible Deadpool, but the process involved continued torture that would make even the “Zero Dark Thirty” crew blanch. Since escaping from Ajax’s clutches, Deadpool has sworn vengeance, with the help of his roommate Blind Al (Leslie Uggams — yes, that Leslie Uggams) and bartender Weasel (T.J. Miller, playing the comedic straight man for once).

The person Deadpool wants to keep out of this vendetta is Vanessa (Morena Baccarin, “Gotham”), the love of his life — Ajax’s treatment gave Wade powers, but also turned his face into a cross between raw chuck and two miles of bad road, so Wade would just as soon have Vanessa think he’s dead. 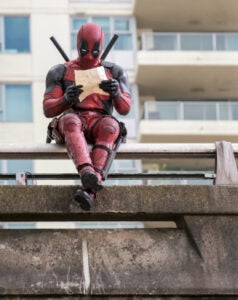 It’s the chemistry between Reynolds and Baccarin that gives “Deadpool” most of its stakes; a lesser film would be undone by the hero’s constant looking at the camera and referencing the fact that this is all a movie, but we genuinely care about whether or not Deadpool will reveal himself to Vanessa, and whether Ajax will use her as a way to capture his nemesis, and that gives this self-conscious movie some necessary grounding.

And if you’re here for superhero shenanigans, director Tim Miller (making his feature debut) doesn’t skimp on that, either, bringing in X-Men Colossus (Stefan Kapicic) and Negasonic Teenage Warhead (Brianna Hildebrand, Sundance entry “First Girl I Loved”) to skirmish with Deadpool before the three team up to take on Ajax and Angel Dust (Gina Carano, who’s an ass-kicking special effect unto herself).

A movie that both features a powerful mutant in tights and contains quippy references to Juice Newton and “Are You There, God? It’s Me, Margaret” rides a fine line in turning off comedy and comic-book fans simultaneously, but for me, “Deadpool” hit the sweet spot of entertaining violence – there’s nothing like an R-rated superhero movie to underscore the ludicrousness of this genre’s bloodlessness – and disengaging humor. “Deadpool” shouldn’t work, but it absolutely does.