On “The Late Show” Tuesday night, Stephen Colbert had a surprise visitor: Ryan Reynolds in character as Deadpool. During his monologue, Colbert was wondering aloud when audiences would get sick of superhero movies when Reynolds’ voice drifted in from offstage suggesting that “Deadpool 2,” which is out on Friday, could be the breaking point.

Then Deadpool himself walked out on the stage and the two bantered for a bit before Deadpool took over Colbert’s monologue completely to make fun of Donald Trump.

Below you can read the full transcript of the whole thing — it’s better that way than because I’m not as funny as they are. You also can watch Deadpool’s appearance on “The Late Show” in the video embedded above.

Colbert: “There are so many superhero movies this year. Besides ‘Avengers: Infinity War,’ we’ve already had ‘Black Panther,’ and pretty soon there’ll be ‘Ant-Man and the Wasp’ and ‘Aquaman’ and ‘Venom’ — I mean, at what point will audiences say, ‘enough with the superheroes’?”

Colbert: “What! What! Well. Look at that! Deadpool? Holy cow! Deadpool, star of the movie ‘Deadpool.’ ”

Deadpool: “Please guys, no one stand up. Its CBS. I know how old your audience is.”

Colbert: “Wade, I’m in the middle of my monologue right here. You do realize I’m doing a show right now?”

Deadpool: “Don’t be disgusting, Stephen. This is a great opportunity for me to promote my new movie, ‘Deadpool 2,’ in theaters Friday. And, yes, I would love to be your guest tonight. Thank you for asking.”

Colbert: “Well, obviously, that would be lovely, but I already have a guest. It’s Academy Award-winner Jamie Foxx.”

Colbert: “Okay, I think you should go now.”

Colbert: “Oh, really? You think you could do this, both stand and read jokes? You know, in our own way, we late night hosts are basically superheroes.”

Deadpool: “Because you’re all mostly white men? Come on, come on, give me those glasses. Let’s go.”

Also Read: Colbert: If Post Offices Are Forced to Put Up Pictures of Trump and Pence, They Should Be the Size of a Stamp (Video)

Colbert: “Be careful with those.” 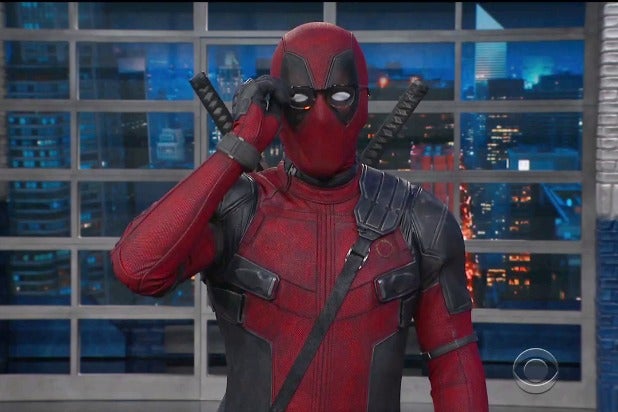 Deadpool: [puts on Colbert’s glasses] “Hello! I’m Stephen Colbert, and I’m legally blind. [hands glasses back] You know, you’re not going to believe this, but Donald Trump is in the news. The administration is still dealing with the fallout from trump announcing that the U.S. will be pulling out of the Iran deal. It’s Trump’s biggest pulling out blunder since Eric. And President Trump spent the day complaining on Twitter about leaks inside the White House, because we all know Trump prefers his leaks in Russian hotel rooms. You get it, Stephen? Because the president watched two Russian prostitutes urinate on a hotel mattress.”

Colbert: “We get the idea.”

Deadpool: “We’ve got a great one for you tonight, folks!”

Colbert: “When I come back, more monologue.”

Colbert: “And ‘Back to the Future’s’ Jamie Foxx is here.”

Deadpool: “And thank god Mr. Blake Lively is not. Oh god, I don’t feel well. [Deadpool starts to fade from existence, ‘Infinity War’-style] Oh, what the f—! Thanos? You don’t have the budget for this, Colbert!”