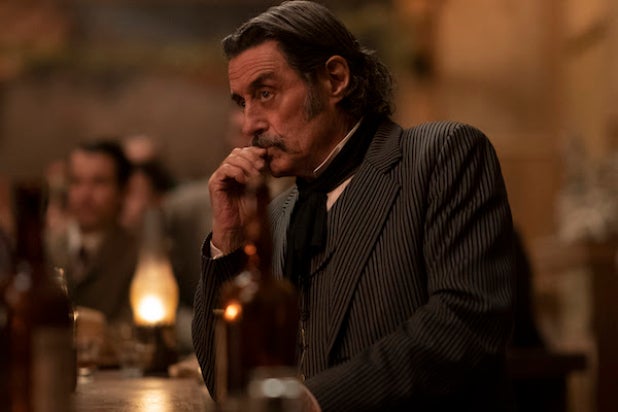 The woman sitting next to me at the premiere of “Deadwood: The Movie” felt compelled, about half an hour in, to take out her phone and start scrolling. I asked her to put it away, and she glared at me, then left the theater soon after. Good: The return of “Deadwood” demands and deserves our full attention.

The film, ironically enough, centers on the arrival of disruptive technology in a Wild West town, and how it will make life both easier and more frustrating. The people of Deadwood won’t be as isolated as they used to be, or as close to each other. The story moves at a precise chug, earning every forward action, and I wouldn’t have minded a journey twice as long.

“Deadwood” ran on HBO for three seasons from 2004 to 2006, and was best known, as far as I understand, for its blend of beauty and ugliness, hope and desperation. As you may have guessed from my phrasing there, I’ve barely seen the show. I hope that this disclosure won’t shake your faith in the praise that follows, but might rather reassure the similarly unfamiliar. You don’t need to know much of anything beforehand to enjoy “Deadwood: The Movie” or to enjoy how gorgeously “Deadwood” creator David Milch has ended the story. Perhaps you, like me, will be so impressed by it that you’ll resolve to go back and watch every episode.

Here’s the little bit you might like to know: The show and movie are set in a town called Deadwood in South Dakota in the late 19th century where some people go to mine for gold and others go to sell them pickaxes, whiskey, and sex. Many of the characters speak in a kind of Shakespearean English spiked liberally with vulgarities. None speak it better than Ian McShane’s Al Swearingen, a pimp and saloonkeeper played exquisitely by Ian McShane. He’s surrounded by a murderer’s row of actors, only a few of whom play actual murderers: Timothy Olyphant as Seth Bullock, Robin Weigert as Calamity Jane, Molly Parker as Alma Ellsworth, Brad Dourif as Doc Cochran, John Hawkes as Sol Star, Paula Malcomson as Trixie.

It feels rude to highlight some but not others when all of the cast is so uniformly excellent. The characters feel familiar to each other, and we sense that we’re seeing both the beginning of a community and the end of it.

Olyphant’s Seth radiates decency and a scuffed pragmatism about how Deadwood works. Malcomson’s Trixie is the heart of the thing, never giving an inch or playing politics. Everyone loves her for it, even Swearingen, who — maybe this is one other thing you should know — beat her brutally on the very first episode of “Deadwood.”

This is a story about seeking redemption before the end. It may be, sadly, the last of Milch’s work, given his recent discussion of an Alzheimer’s diagnosis.

But at least he doesn’t need redemption. His story arrives just on time, just in time, never slipping from its track.