Christmas came early this year. IFC Films has acquired the North American rights to “Dear Santa,” a documentary about the U.S. Post Office’s “Operation Santa” program that helps get children’s letters to Santa in the hands of those who can help make kids’ Christmas wishes come true.

Dana Nachman, who directed the documentaries “Pick of the Litter” and “Batkid Begins” about the viral “Batkid” sensation, directed “Dear Santa.” And IFC Films will release the documentary on December 4 during the 2020 holiday season.

For 100 years already, the Post Office has run its “Operation Santa” program, which filters hundreds of thousands of letters addressed to Santa and delivers them not to the North Pole but to “Operation Santa” centers around the country, whether in New York City or in small towns where the Post Office is often the heart of the community. From there, the letters are sent, often to strangers, who out of the goodness of their hearts can help to deliver toys to those in need and make some dreams come true.

“Dear Santa” specifically follows the process surrounding the delivery of one letter that asks for something other than a toy, and the film examines the value of this American tradition and asks audiences to think about how they can make the world a better place.

The film is produced by Chelsea Matter, Brendan Gaul, Christopher Karpenko and Nachman in partnership with UM Studios 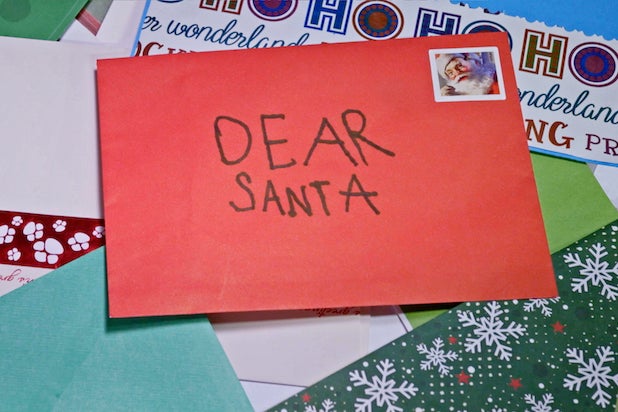 “We’re delighted to partner with Dana once again, this time on ‘Dear Santa,’ which puts a spotlight on the incredible individuals behind projects like ‘Operation Santa’. Dana is a documentarian who reminds us continually of the importance of community and we are certain this film will bring joy to viewers of all ages this holiday season,” Arianna Bocco, EVP of acquisitions and productions at IFC Films said in a statement.

“I have had the absolute honor of being able to work on ‘Dear Santa’ for the last 10-months. The opportunity to dive into a story that highlights the best of humanity during one of our nation’s darkest times has been an immeasurable gift. I am so thrilled that ‘Dear Santa’ will now go out into the world and be a gift for audiences everywhere,” Nachman said.

IFC previously released Nachman’s “Pick of the Litter” about puppies that are trained to become seeing eye dogs, and the film grossed over $1 million globally at the box office between its theatrical release and on-demand and digital revenue.

The deal for “Dear Santa” was negotiated by IFC Films’ EVP of Acquisitions and Productions Arianna Bocco with ICM Partners and Submarine Entertainment on behalf of the filmmakers.

20 Ugly Christmas Sweaters on TV and in Film, From 'Real Housewives' to 'Step Brothers' (Photos)

'Tis the season to be jolly... and what better way to start things off with a smile than to point out some truly unattractive holiday wardrobe choices? Here are a handful of the ugliest Christmas sweater to be found on TV and in films.