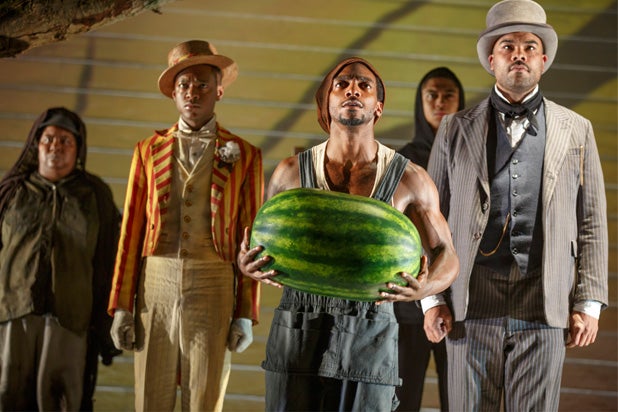 The power of Suzan-Lori Park’s writing lies in what she leaves unsaid. In her hypnotic, transcendent, and unfortunately titled new play, “The Death of the Last Black Man in the Whole Entire World AKA the Negro Book of the Dead,” Parks creates a pool of pain and fear that’s sourced by a spring of raw, caustic wit. That wicked humor keeps bubbling up to the stormy surface to explode and fill Off Broadway’s Pershing Square Signature Center, where “Last Black Man” opened Sunday.

Lileana Blain-Cruz’s kinetic staging immediately trots out 11 African-American icons, costumed by Montana Blanco to resemble racial stereotypes that we can quickly identify only to have the text subvert our assumptions. It’s what Parks doesn’t tell us about these “figures” (in her script, she eschews the word “characters”) that fascinates, just as her decision not include a death by police gunfire gradually permeates the show.

And it’s quite a show. Blain-Cruz directs as if Parks had handed her a musical comedy, even though the history of innocent black men being subjugated, lynched, and executed is her subject. There’s song and dance, but most arresting is the stylization of the dialogue, as if the actors were singing recitative a capella.

“Last Black Man” abounds with so many cultural references, many of which may go right over your head — but no matter. Through an exquisite repetition, Parks makes the sounds of the words as important as the meaning. This observation may send many theatergoers running in the other direction, but “Last Black Man” often achieves the trance-like effect of a Philip Glass opera.

Parks doesn’t give us many familiar touchstones on which to hang her story. Christopher Columbus is often referred to by a figure named Before Columbus (David Ryan Smith), who tell us, “Back then when they thought the world was flat they were afeared and stayed at home….Figuring out the truth put them in their place and they scurried out to put us in ours.” That’s one of the more easily understood statements delivered in “Last Black Man.”

More typical is Queen-Then-Pharoah Hatshepsut (Amelia Workman, looking and acting like Diana Ross if she ever got the chance to play Cleopatra), who says things like, “My black man is subject my man uh all mens my my my no no not yes not not yes thuh hands.” Why Parks has chosen to represent Hatshepsut, the second female pharaoh, and not the first, Sobekneferu, is not made clear. But Parks no doubt has a very good reason. Also mentioned is Gamble Major, a slave who becomes the leader of the civil rights movement. The name is a play on Major Robert Gamble, a plantation owner who kept over 200 slaves in Florida.

So what’s the plot? It’s not that kind of play, obviously. The central male figure, Black Man With Watermelon (the awesomely empathetic Daniel J. Watts), endures repeated electrocutions and lynchings that test the love of the central female figure, Black Woman With Fried Drumstick (the equally empathetic Roslyn Ruff). Only gradually do we come to see them as a couple, a kind of every black man and every black woman who resemble Samuel Beckett’s Vladimir and Estragon, only Parks has given their struggle an arc.

Circling around Watermelon and Drumstick (sex and food) are the icons that really defy our quick categorization. One actor (William Demeritt) is put in Malcolm X’s signature eyeglasses, white shirt, and black suit and tie, but Parks gives this figure the name Voice on Thu Tee V. He keeps delivering extremely upbeat updates on the execution of the last black man. There’s also a little girl (Mirirai Sithole) who resembles a 1960s child in her Sunday best on her way to church. She repeats “prunes and prisms, prunes and prisms” to make her lips less big, which is why Parks call her Prunes and Prisms. Parks never mentions it, but both these figures, we know, are doomed.

The Broadway season so far is a big dud. But great plays have been opening Off Broadway. “Last Black Man” joins “A Life,” “Love, Love, Love,” and “Sweat” as must-see theater.