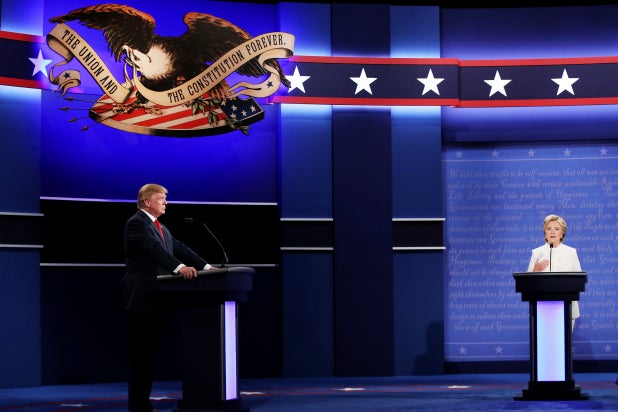 Donald Trump and Hillary Clinton during the third U.S. presidential debate at the Thomas & Mack Center on October 19, 2016 in Las Vegas, Nevada. Tonight is the final debate ahead of Election Day on November 8.

ABC was the most-watched broadcast network last night for the third and final 2016 presidential debate, which currently appears up from the second bout, but down from Donald Trump and Hillary Clinton’s record-setting initial meeting. Last night, the Disney-owned channel tied with NBC atop the key 18-49 demographic over those 90 minutes of primetime, however. ABC kicked the evening off with a traditional airing of “It’s the Great Pumpkin, Charlie Brown.”

Including the entirety of Wednesday’s primetime, ABC stood alone as first in the main demo, though CBS actual took the overall-eyeball competition. Read about the debate’s earlier overnight Nielsen numbers here. Final TV ratings for the simulcast will come out this afternoon.

Also Read: Final Presidential Debate Ratings Grow From No. 2, But Nowhere Near Trump-Clinton 1

Univision was fifth in ratings with a 0.8/2 and in viewers with 2.2 million.

Telemundo was sixth in ratings with a 0.6/2 and in viewers with 1.6 million.