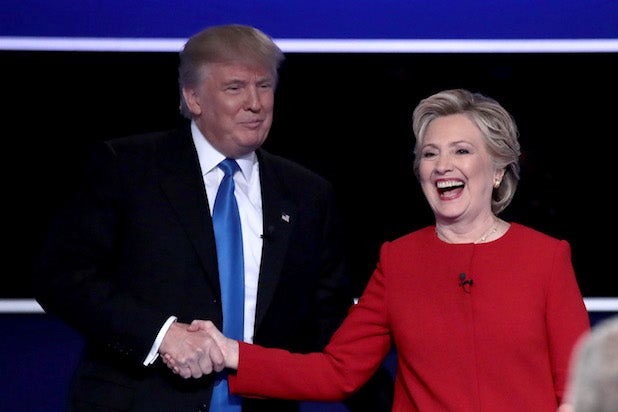 Updated Wednesday, September 8 at 10:52 a.m. ET:
Nielsen officially estimates that a record-breaking 84 million total viewers (a 27.8 rating) tuned in to watch first Trump-Clinton debate across 13 TV networks on Monday night. Those eyeballs came from 56.4 million households, which translates to a 47.6 rating.

Previously:
Well, Donald Trump’s right about one thing, at least — he definitely brings in TV ratings. And you can fact-check him on that.

Trump and Hillary Clinton broke the previous Nielsen record for a presidential debate, which was set in 1980 when Jimmy and Ronald Reagan drew 80.6 million total viewers.

Here is a list of all televised debates ranked by their Nielsen numbers, including that previous high-water mark from 36 years ago. There were far fewer TVs back in 1980 and a smaller U.S. population, but also less competition and fewer means of viewing.

Also Read: Taliban as Disappointed in the Presidential Debate as the Rest of Us

PBS figures show that over two hours of live coverage, the network averaged 3 million viewers, in addition to the 80.4 million. (That rounded number is the same from just 9-10:30 p.m. ET, when the debate aired.)

We don’t have complete numbers on how many people streamed the debate just yet. The Trump-Clinton debate live-streamed on Twitter, Facebook Live and YouTube, where millions more surely tuned in.

Here are the cable news numbers from Monday’s event, and here are preliminary broadcast figures.

Check back to this post for updates, as Nielsen has yet to release its official final tune-in numbers. They’ll only go up from here.